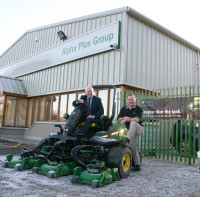 Customers and staff looked on as special guest Jim Milne CBE, chairman and managing director of Aberdeen-based Balmoral Group Limited, cut a green and yellow ribbon to declare the building officially open for business. Situated 10 miles north west of Aberdeen on the main A96, the 8000ft2 building features newly fitted out offices and workshop facilities, a machinery showroom and the largest stock of groundcare parts in north east Scotland.

Alpha Plus Groundcare was originally appointed a full line commercial & consumer equipment dealer by John Deere in January 2003, and has been looking to relocate from its previous base at Lethenty Mill, near Inverurie, for some time. The business currently employs 15 staff, with sales of professional golf and turf equipment and domestic lawn and garden machinery covering the Grampian and Moray areas.

It is a division of Scotland's leading provider of facilities management equipment, Alpha Plus (Scotland) Ltd, which was set up in 1991 by managing director Steve Matthews, primarily to sell equipment to local authorities throughout Scotland.

"This new facility underlines the Alpha Plus Group's commitment to this business, and our intention to be the major supplier of groundcare equipment in north east Scotland," said Steve Matthews at the opening. "We have a dedicated team of specialist staff, many with considerable John Deere experience, led by director and dealership manager, Raymond Warrender. Raymond has spent over 30 years in the industry and is well known by every golf club, local authority and contractor in this area.

"The new site has great potential, and subject to planning permission, both the showroom and workshop areas will be extended in 2007, effectively doubling the size of both," added Steve Matthews. "The move has already given us the opportunity to display a much wider range of John Deere machinery and merchandise, as well as our other product lines. It also means we will be able to provide an even higher level of parts and service support to our customers, which has been the key to our successful development over the past few years."

During his speech, Jim Milne said: "I'm confident that this investment in what must be one of the best facilities of its type in the north of Scotland, if not the best, will help Alpha Plus develop its business even more quickly in the future than it's done in the past, and I wish Steve and his team all the best."