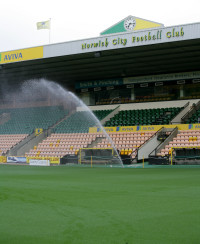 Norwich City FC's Carrow Road stadium is the first Football League ground in the country to feature John Deere's new irrigation sprinkler heads. Supplied by dealer Ben Burgess, 10 MC75 3in and four MC55 2in straight nozzle heads have been installed by Irrigation Services (UK) Ltd of Norwich in time for the new season.

Head groundsman Gary Kemp oversaw the construction of a new Desso GrassMaster pitch at the stadium in 2004, in which natural grass is reinforced with synthetic fibres that knit the pitch together, providing excellent wearability and drainage as well as a consistent playing surface throughout the season.

"Being sand-based, the pitch needs a good, reliable watering system, as without this the grass can go off quite quickly," says Gary. "With football today, watering is one of the main techniques used to make the ball zip about. In keeping with modern day practice, generally we do a heavy watering on Friday, then on Saturday we can water the pitch anything up to six times leading up to kick-off, then again at half-time, plus another good soaking again after the match - so the sprinklers get a lot of use throughout the season.

"As our existing sprinklers were coming to end of their life and needed replacing, we tried out one of the new John Deere heads last year, as well as a couple of alternatives, and we found the John Deere units were by far the best option for us.

"For maintenance all the new heads are serviceable from the top, so there's no need to dig them out each time. Another advantage is that no dirt can get into the heads, because of the way they are constructed - we have a gravel track around the edge of the pitch, which was a nightmare with the old sprinklers as we had to keep cleaning them out all the time. The John Deere heads feature a dual flushing system which cleans them out automatically as they move up and down. 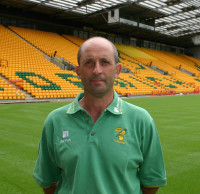 "As with all our other equipment, the dealer back-up is superb. This is crucial, as we can't afford to be without the watering system - if there is a problem at any time, we can order parts and get going again within a day, which is the most important thing."

"Everything is bought on a five-year John Deere Credit lease with maintenance, which is a good arrangement," says Gary. "The club knows what the monthly payments are to the penny for budgeting, and we can change the kit regularly to take advantage of the latest technology, which makes life a lot better for the grounds staff."