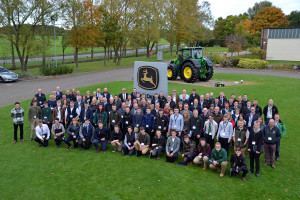 John Deere’s first female and forestry technicians have been registered in the latest intake for the company’s award winning apprenticeship scheme, managed by training provider ProVQ, which celebrates its 25th anniversary this year.

A total of 34 apprentices have signed up to begin their first year of training in the work-based Ag Tech, Parts Tech and Turf Tech advanced apprenticeship programmes, including Zoe Parker of dealer Ben Burgess Coates and Matthew McPherson of John Deere Forestry in Carlisle.

The apprentices, their families and sponsoring dealers attended an induction day at John Deere’s Langar headquarters and were given a tour of the branch and a ride & drive session with the latest Gator utility vehicles. They also visited the new John Deere Apprentice Training Centre at nearby Radcliffe-on-Trent in Nottinghamshire. This is the British agriculture and turf industry’s first and only purpose-built apprentice training facility, designed specifically and solely for John Deere dealer apprentices.

In addition the dealers took part in an employer’s workshop, which provided an overview of developments to the scheme for 2017 and what will be required in terms of apprentice mentoring, support and career opportunities. This is in line with plans for the new Government led apprenticeship framework that has recently been announced, which aims to attract 3 million apprentice starts by 2020.

John Deere’s apprenticeship scheme was the first land-based agricultural and turf machinery programme to deliver training in the workplace, at the sponsoring dealership, with assessment and guidance from ProVQ’s team of expert assessors. Additional block release training takes place at the new Apprentice Training Centre.

The three-year Ag and Turf Tech apprenticeships lead to IMI Level 2 and 3 Diplomas in Landbased Engineering. Each year group trains at the centre for eight weeks a year in four blocks of two weeks, with some days spent at Langar when working with larger machines such as combines and self-propelled forage harvesters.

The two-year Parts Tech apprenticeship, leading to a Level 3 Diploma in Vehicle Parts Competence, is mostly work-based at the sponsoring dealer, with four weeks of training taking place at Langar.

Graduating apprentices can then complete three free courses to gain the John Deere Diploma and start their adult training at the John Deere University (JDU), using the knowledge and skills gained from their initial one-, two- or three-year apprenticeship. After additional training and experience, they can ultimately go on to achieve the highest possible LTA4 Master Technician accreditation.

Ag Tech was the first such scheme to be introduced in the UK and won a National Training Award at the end of 1997, the only one ever made to an agricultural machinery apprenticeship programme. Since the first programme started in 1992, more than 600 apprentices have graduated through all the training programmes and been employed in the company’s nationwide dealer network.