Since Pitchcare was launched I have had the pleasure of seeing the latest machinery innovations to help Groundsmen and Greenkeepers in their daily work. The 'MagKnife' from Ransomes Jacobsen, theSISIS 'Aer-Aid', all pieces of equipment that would have helped me in my daily work. Now here's a concept that removes the need for hydraulics, and therefore removes the worries of leaks and pipes bursting, while preparing your given surface. In my fifteen or so years, practicing Groundsmanship, I had leaks and blown pipes on a number of machines, and in one instance at Northampton Town FC, a great deal of embarrassment, after a line of hydraulic fluid had been sprayed up the middle of the pitch pre-season, following a burst connection.

So here goes, a press release from Steve Mitchell, that's well worth noting, as I hope the system can and will be developed across a much bigger range of machinery. 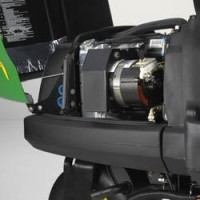 This advanced electrical reel system allows the cutting units to be powered independently of the traction speed, unlike hydraulic reel circuits. This means the operator is able to reduce engine rpm without slowing reel rpm or mowing speed, thus reducing sound levels down to 79dBA while maintaining cut quality and productivity. This can also reduce fuel consumption by an average of 10 per cent. In addition, backlapping can still be carried out using variable control of the reel speed and direction.

Like the existing 2500A greens mower, the 2500E is equipped with three 56cm (22in) cylinders, available with either seven- or 11-blade reels and smooth or grooved front rollers. These are offset to the left to help reduce tracking on greens, caused by regular mowing; this is done by changing the direction of travel on alternate days. 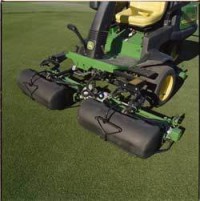 During the perimeter cut, the tyres roll across one area of the green one day, and a different area the next, enabling it to recover between cuts. Height of cut can be varied from 3 to 19mm (1/8 to ¾in), and overall cutting width is 1.57m (62in). The Quick Tach cutting unitsfloat independently to follow ground contours.

The comfortable operator station features a five-position steering wheel, adjustable seat and the CommandArm operator console, which provides fingertip control of the throttle, reel drive and raising and lowering of the cutting units. Further operator benefits include hydrostatic drive with two pedal foot control, on board diagnostics as standard and easy servicing, with a built in toolbox below the CommandArm on the driver's right hand side.