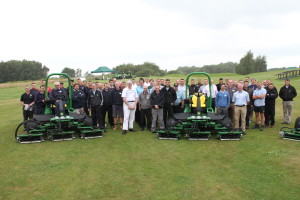 The aim of the event was to promote the company's latest product launches for 2014. After a brief introduction to the day by John Deere Territory Manager Nick Ashman the attendees were split into three groups and each given a presentation at a work station about the new products. There was also the opportunity to try them out after lunch.

Station A - the new A Model mowers: features include a simple to use TechControl display, LoadMatch from the John Deere compact tractor range, and OnCourse Technology for improved overall performance and reliability.

The new A Model range have been completely rebuilt from ground up and features a brand new TechControl display, LoadMatch from the John Deere compact tractor range, internal wet disc brakes and improved operator stations - all engineered to provide users with greater control of the machines, easier operator training and best in class cut quality. 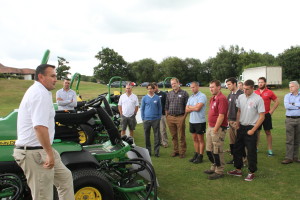 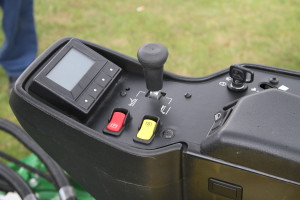 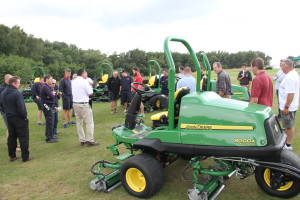 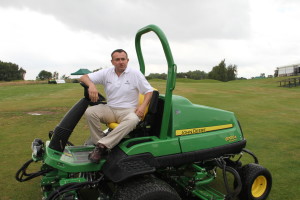 The simple to use, password protected TechControl display enables the course manager, head greenkeeper or deputy to quickly set or change mowing, turning and transport speeds, for example, to limit variations in performance by different operators and provide a more consistent, quality finish. On-board visual diagnostics and the ability to set regular service times also help to maximise productive time.

A popular feature adopted from the John Deere compact tractor range is LoadMatch, which automatically adjusts the speed of the machine to deliver consistent power to the cutting units during heavy load conditions. This is also designed to maximise productivity and maintain high levels of cut quality.

In addition to these key systems on every model, the 7500A, 7700A and 8700A PrecisionCut and the 7500AE hybrid electric fairway mowers feature an improved operator station, with multiple step locations making it easy to get on or off the mowers from either the front or rear. Tyre alignment has also been improved to deliver an even after-cut appearance across the mowing pass. 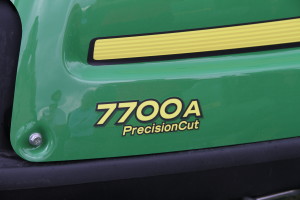 In addition, the new A Model E-Cut hybrid electric fairway mowers can be set to automatically deliver reduced engine speed during mowing, with fuel savings of up to 30 per cent.

The new John Deere 7200A PrecisionCut, 7400A TerrainCut and 8800A TerrainCut tees & surrounds and rough mowers also share many of the same features as the new fairway mowers. Both the 7200A and 7400A are equipped with a new larger eHydro transmission and redesigned wheel motors for improved traction performance, especially on slopes, while the 8800A is equipped with a new 55hp four-cylinder engine producing over 27 per cent more power.

Each machine in the new A Model line-up is produced using an updated assembly process at John Deere's Turf Care facility in North Carolina, USA. The process incorporates advanced manufacturing technologies such as smart tools and vision systems to provide consistent build quality across the range.

John Deere has also announced updates to the 2653B PrecisionCut tees & surrounds mower and the 2500B PrecisionCut and 2500E hybrid electric greens mowers for 2014. 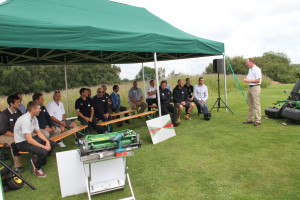 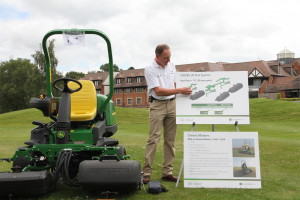 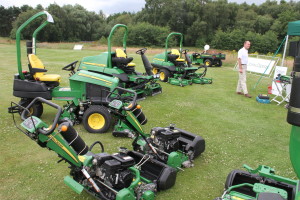 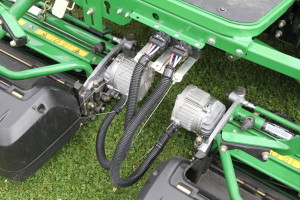 Station C - the new A40 Precision pedestrian aerator: features a patented articulating frame to provide more consistent hole depth in undulating terrain, as well as the ability to change hole spacing on the move and a tighter turning radius.

John Deere has launched the brand new A40 and V40 PrecisionCore pedestrian aerators for golf greens and other fine turf areas. Based on extensive customer feedback, and replacing the previous Aercore 800 model, these latest machines have been designed from the ground up to provide increased productivity and efficiency compared to traditional aerators on the market. 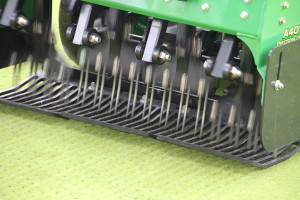 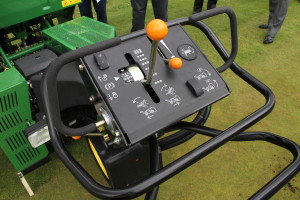 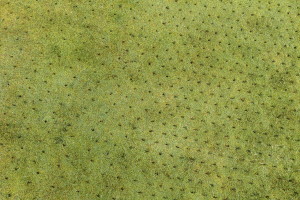 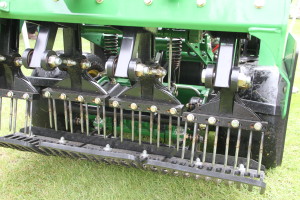 A patented articulating frame delivers more consistent hole depth on undulating terrain, and operators can now change hole spacing on the move. The aerators also feature a tighter turning circle, for sharper, quicker turns, and are available with an optional verticutter attachment for aerating and verticutting the turf in one pass. A redesigned operator station provides easier control of the machines, as well as reduced levels of handlebar vibration.

To match the performance standards of these new aerators, John Deere has also launched a range of top quality Precision Tines for use on greens, tees, fairways and roughs.

Available in a choice of Precision Standard, Precision Plus and Precision Ultra designs, these durable new tines have been engineered with fine detail and accuracy to allow greenkeepers and groundsmen to customise their aeration technique based on the needs of their individual course and different soil conditions.

All of the solid tines in the range start as a single raw solid alloy rod, which are then machined for precision, increased strength and durability. The hollow top and side eject tines start out as hollow alloy tubes and are specially formed to provide a smoother interior and exterior surface for easier ground penetration and less risk of blocking. 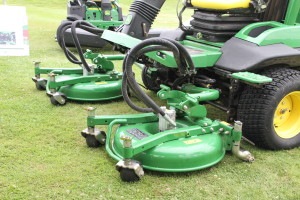 John Deere's new, advanced technology fairway mowers and aerators for 2014 can be seen at 17 golf course locations throughout Great Britain, Northern Ireland and the Republic of Ireland from early July until mid-August.

Free places at each John Deere Take Control 2014 Golf Roadshow event should be booked in advance by contacting your local John Deere professional golf & turf dealer, or the company direct on Freephone 0800 085 2522. The full list of venues is given below, or can be found at www.JohnDeere.co.uk (look for the Golf Roadshow Events link on the home page), along with a dealer locator.

Each day's programme will start at 10am, and light refreshments will be provided.