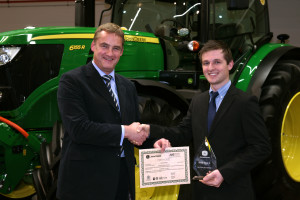 The group of third year students received their certificates at the John Deere Forum visitor centre in Mannheim, Germany during the annual graduation visit to the company's tractor and cab factories and European Parts Distribution Centre (EPDC) in December. The presentations were made by Deere & Company's Region 2 marketing director Helmut Korthoeber and John Deere Limited training centre manager Richard Halsall.

Charlie Phipps received a crystal plaque, a certificate and vouchers for workshop tools worth £250. His ProVQ regional assessor Roger Hawlor and technical trainer Richard Jenkins said: "Charlie has been a first class student since the beginning of his apprenticeship. His application, effort and motivation throughout have been outstanding, and he has been an excellent ambassador for both the apprenticeship programme and the Farol dealership."

Farol agricultural service manager Phil Jenkinson added: "This is a fantastic accolade for Charlie who, since joining Farol in 2012, has excelled throughout his apprenticeship. He has clearly demonstrated what he has learnt through the training scheme by building excellent customer relationships. Charlie serves as role model by showing just what can be achieved with hard work, and he continues to help our up-and-coming apprentices achieve their goals." 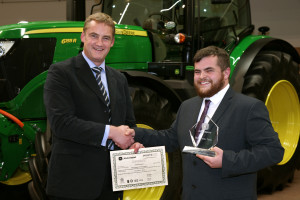 Grant Stearman received a certificate and shopping vouchers worth £250. "Grant has worked very hard throughout his apprenticeship and thoroughly deserves this recognition for his efforts," said his ProVQ assessor/trainer Amanda White. Ben Burgess & Co service director Jimmy Lockhart added: "This is an excellent achievement and it's great to see all of Grant's hard work pay off. Grant is an important member of our parts team at Beeston and we look forward to helping him continue to develop in his role. We hope his achievement will encourage our apprentices to aim high and also encourage those thinking of taking on an apprenticeship to join us."

Apprentices can also choose to complete their education for a fourth year to gain the John Deere Diploma and register at LTA2 level in the industry's Landbased Technician Accreditation scheme, while starting their adult training within the John Deere University.

Now in its 24th year, Ag Tech was the first such scheme to be introduced in the UK and won a National Training Award at the end of 1997, the only one ever made to an agricultural machinery apprenticeship programme. Since the first programme started in 1992, more than 600 apprentices have graduated through all three John Deere schemes (Ag Tech, Parts Tech and Turf Tech) and are now working in the company's nationwide dealer network. A new Customer Service Tech training programme was also introduced in 2013.