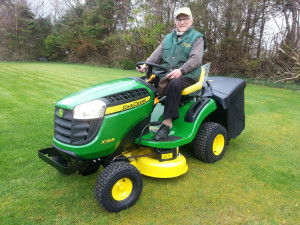 The X135R is only Michael's second ride-on mower. His previous model was also a John Deere, which he bought from Weldons in May 2005 when his family suggested that it was time to get someone in to mow the lawns for him. "No way," was Michael's response to that idea, although he did decide to replace his 12-year old John Deere 14SB walk-behind with a ride-on.

With three separate lawns in a garden that's around half an acre, cutting the grass with a walk-behind mower had become a considerable task, even for someone who's been gardening for well over 60 years and regarded mowing the lawn as much better exercise than taking up golf.

"I was quite the man about town until I settled down and got married in 1949. I started gardening the following spring and I've stayed with it. I love to see things growing. You plant a seed and something beautiful grows. There's an element of creativity about it."

When Michael's nine-year old LR135 John Deere lawn tractor recently came back from its annual service, he got chatting to transport manager James Weldon. A few days later, James' brother Padraig Weldon called on Michael with a new X135R for him to have a look at. With its easy to use controls, comfortable operation, rear collection system and, as Michael puts it, "a trade-in price I couldn't refuse" the X135R was a winner. Michael liked it so much that he did the deal there and then.

Michael admits to cutting back on his gardening these days. "I'm not as young as I used to be but I like to do a bit of tinkering outside. I don't grow too many vegetables now and some of the vegetable patch is going to be converted to more lawn, but I've just planted onions, and I've already got potatoes and cabbages in. I like to keep my garden tidy and colourful. Tulips, primroses and daffodils in spring, and I love the roses that come later."

Asked what keeps him so active, Michael's response is clear: "I'm often asked what's the secret. Physical exercise, a healthy appetite, moderation in everything and enjoy your life. Gardening keeps you fit. Even if you just dig a hole today, and then fill it in tomorrow, you are doing yourself a good turn with the exercise. It's the same in gardening and in life. Do it right and you'll be successful. That encourages you, and then you're even more successful."