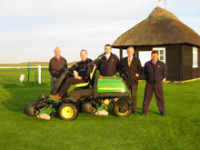 John Deere is pleased to announce that local dealer Godfreys from Sevenoaks, Kent, has entered a three year preferred supplier agreement with The Royal St George's Golf Club, Sandwich, host club of The 2003 Open Championship. This means John Deere will have supplied course maintenance equipment for three consecutive Opens, in 2001 at Royal Lytham & St Annes, in 2002 at Muirfield and now again in 2003.

Godfreys delivered its first machine to the club last October, a 2500 triple greens mower. Two further 2500s, a 3235B fairway mower, a 2653A mower for tees & bunker surrounds and a 48hp 4700 compact tractor are also now being delivered. The club will seek to add to its range of John Deere equipment as existing machines need to be updated.

Having conducted extensive trials with John Deere and Godfreys over the past few months, the club has been impressed by the quality and reliability of the machines, as well as the support service offered.

"These factors, alongside John Deere's performance at major championships, have helped clinch the deal," says John Rolleston, Godfreys dealer principal. "We are delighted to support Royal St George's for the prestigious Open event."

Neil Metcalf, course manager, comments: "We have been most impressed by the reliability of the John Deere machines, their high quality of cut and their adaptability working over our undulating links fairways and greens."

The 2003 Open Championship takes place from July 17 to 20. John Deere was also appointed preferred supplier to The De Vere Belfry for the 34th Ryder Cup matches held in September 2002, and the 2002 Benson & Hedges International Open. 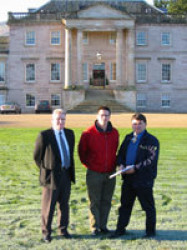 Loch Lomond Golf Club, ranked among the world's top courses and home to the 2003 Barclays Scottish Open, has recently signed a three-year exclusive deal with John Deere as its preferred supplier of course maintenance equipment.

Located on the banks of the famous Scottish Loch and set within the ancient 12th Century Clan Colquhoun estate, the 300-acre private members course is managed by golf course superintendent Ken Siems and his staff.

Ken has been at Loch Lomond since it was established nearly 10 years ago, before which he was working in the trade in his home country of Canada. The club has been supplied with course maintenance equipment from local dealer Nairn Brown in Glasgow since its opening, and took delivery of its first John Deere machines when Ken arrived - a 6x4 Gator utility vehicle, a 955 compact tractor and a 220 walk-behind greens mower.

"We have built up a very strong relationship with Nairn Brown over the years and the service and support that they give us has been fundamental in signing this three-year agreement," says Ken.

"The John Deere machines are very reliable and the quality is second to none. They could offer us everything that we needed at a very competitive price."

"Within the 300-acre grounds there are areas of woodland, rough grass and wetlands, and the range of John Deere equipment that is available means there is a machine to handle every situation," adds Ken.