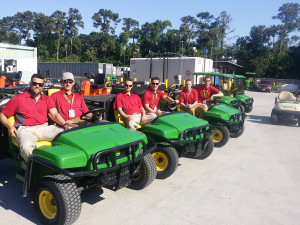 Once again, five BIGGA members from Great Britain and a GCSAI member from Ireland will be enjoying the opportunity of a lifetime when they join the golf course maintenance team at the legendary TPC Sawgrass venue in Florida for the 2016 Players Championship, courtesy of John Deere.

The greenkeepers won their place on the trip by registering their interest on the respective association websites, before recording a short video about themselves and their career aspirations. The winners then made it through their regional interviews, conducted by a panel of representatives from BIGGA/GCSAI and John Deere.

The 2016 Players Championship on the PGA Tour - the unofficial 'fifth major' - takes place in May. American Rickie Fowler won in 2015 following the greatest last round finish in the 34-year history of the tournament, carding birdie-eagle-birdie-birdie for a place in the final play-off.

"A phenomenal 12 days unlike anything I have ever experienced before - flawless organisation and unrivalled passion and motivation," said Joe Dormer of West Sussex Golf Club in Pulborough.

"It was a privilege to share this experience with other greenkeepers. From taking their advice and witnessing their aptitude, to conversing with the team on such a stage, was a great learning curve," added Chris McArthur, from Portstewart Golf Club in Co Londonderry, Northern Ireland.

"A life changing experience is the only way I could describe the 12 days away. I knew it was going to be special, but this has surpassed anything I expected," said David Perdisatt of Naas Golf Club in Co Kildare, Ireland.

Pete started out at Vivary Park Golf Club and then took an unpaid role at Taunton & Pickeridge Golf Club to further his greenkeeping experience. His next job was at Weymouth Golf Club and he completed his Level 3 qualification before joining Remedy Oak Golf Club, where he helped the team complete a recent greens rebuilding programme. He has also been a volunteer at Wentworth for the BMW PGA Championship.

Graeme began his greenkeeping career as an apprentice at Glencorse Golf Club before moving on to Mortonhall Golf Club. During a period travelling the world with his wife, he secured a six month internship at Pacific Golf Club in Australia and then accepted his current role at Murrayfield. Graeme was part of the BIGGA support team at the 2015 BMW PGA Championship.

Stuart started out as an assistant greenkeeper at this links course aged 16, and he became head greenkeeper at just 18 years old. He is in charge of a youthful team and has overseen various construction projects on the course. Stuart has joined the BIGGA support teams at The Open and the BMW PGA Championship, and is also a member of BIGGA's Young Greenkeeper Committee.

Nicholas began his career at Essendon Country Club, then moved on to The Hertfordshire Golf Club where he was promoted to first assistant greenkeeper. Now at South Essex, he was part of the BIGGA support team at the BMW PGA Championship and the British Masters at Woburn. He is a three handicap golfer hoping to eventually play off scratch.

Chris discovered his love for greenkeeping during work experience at Mountain Lakes Golf Club in mid Glamorgan, and then gained a position at Cottrell Park Golf Resort. He moved to Celtic Manor and was part of the greenkeeping team for the 2010 Ryder Cup, before joining the team at Harewood Downs Golf Club. He became course manager at Hampstead in 2015.

Lenny started his greenkeeping career working on the Colin Montgomerie designed inland links course at Carton House Golf Club, which hosted the Irish Amateur Open in 2005, before moving to Westmanstown Golf Club. Since then he has completed his advanced certificate in Greenkeeping FETAC Level 6 and is now studying online for an HNC in golf course management from SRUC Elmwood College in Scotland.