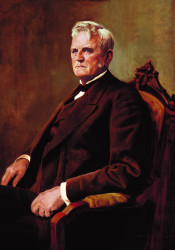 John Deere, the blacksmith who founded Deere & Company, secured his place in history in 1837 with the invention of a self-scouring steel plough that helped open up the American prairies of the mid-West to agriculture in the early part of the 19th century. The basis of the Deere philosophy goes back to the founder himself, who said: "I will never put my name on a product that does not have in it the best that is in me."

Nearly 180 years later, 2016 marks the 50th anniversary of John Deere Limited in the UK and Ireland. The company started trading from Langar, near Nottingham in January 1966 and, from those very small beginnings, it has grown to be the biggest supplier of agricultural and turf machinery to the British and Irish markets.

John Deere's oldest tractor, the 25hp Waterloo Boy from 1918, was originally sold in the UK from 1915 under the Overtime name; it was given credit for helping to win World War I by putting in many hours of overtime producing food for the war zone and the home front. Later in the 20th century, John Deere three wheel, high clearance tractors came into East Anglia from America at the end of the Second World War, under the lend lease deal. 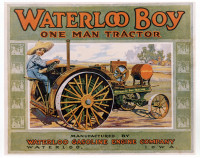 John Deere Company Limited was first incorporated on 22 August 1951, but plans to set up a UK manufacturing site near Glasgow in the 1950s were frustrated (although John Deere Limited's registered office is still in Edinburgh). As a result, in 1956 the American parent company Deere & Co purchased the Heinrich Lanz business, which included factories in West Germany and Spain, and access to established dealer organisations in both those countries as well as France. The Mannheim tractor factory is still their main European manufacturing base today.

As the marketing company for the UK & Ireland, John Deere Limited was incorporated on 12 January 1966 and started trading that month from its present day headquarters at Langar, near Nottingham, in parallel with the (by then) John Deere owned company, Lundell of Edenbridge in Kent, which eventually went into liquidation in late 1968.

The Langar premises were previously a medical supplies store owned by the Royal Canadian Air Force, which had used the adjacent airfield as an operational base from 1952 until 1963. The original building is still in use today as John Deere's visitor centre and national parts distribution centre.

For a short time in the early 1960s, a handful of dealers sold large John Deere tractors such as the 4010 - the UK's first 100hp tractor - and 4020, which were imported from the USA through a franchise operation. Of those original dealers who continued with the new company from 1966, two are still John Deere dealers today, selling and supporting both agricultural and turf equipment, and are owned by the same families - Ben Burgess in Norfolk and L E Tuckwell in Suffolk.

In 1970, John Deere Limited was awarded the Royal Warrant as suppliers of agricultural equipment to Her Majesty The Queen; this was extended in 2006 to include groundscare and horticultural equipment, a business the company moved into in the UK and Ireland in 1986. John Deere now offers Europe's broadest single brand range of commercial and consumer equipment for lawns, gardens, parks, playing fields, golf courses, sports grounds and other amenity turf maintenance.

David Lowes, the founder of John Deere turf dealership Greenlay Ltd in Northumberland, made his own mark on the company's history by effectively pioneering the use of John Deere diesel engined lawn tractors for commercial mowing in the UK.

This makes Greenlay the oldest John Deere groundscare dealer in the country. Indeed, David Lowes started selling John Deere lawn and garden equipment in 1972, nearly fifteen years before the UK company set up its own groundscare division in 1986.

Deere & Company's first lawn and garden tractor was the 7hp 110, which started production at the Horicon Works in Wisconsin in 1963 - so the story goes, because the company wanted a machine to mow the lawns in front of the worldwide headquarters in Moline. The very first 110 produced by the factory is now on display at the Smithsonian Institute in Washington, DC. 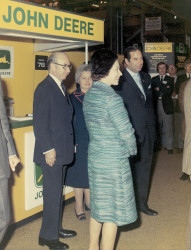 And, although John Deere Limited was established in 1966, it would be many years before it sold anything but agricultural machinery in the UK and Ireland. The fledgling groundscare business therefore relied on other importers, initially Stanhay and a separate parts business in Suffolk; then, in 1972, a new company in Surrey called Ground Control was set up to import, market and distribute the range.

When this business failed a couple of years later, John Deere brought all the equipment and parts back to Langar, and David Lowes acquired and sold it all. From 1974 to 1986, the year when John Deere Limited's new groundscare division was formally established, David sourced (and often personally collected) his machines from France.

He sold his first lawn tractor, a 14hp 140 hydrostatic model bought from Stanhay, to Stanhope & Weardale Co-op, for cutting grass around local caravan parks. One of his major contributions was in the introduction of diesel engines and rear grass discharge, when petrol and side discharge were the order of the day in America.

Amongst the very first local authority users in the UK were Washington Development Corporation, the City of Newcastle, Durham City Council, Jarrow Corporation, Sunderland and Gateshead, the majority of which are still using John Deere fleets today.

1962: Lundell (Great Britain) Ltd at Edenbridge in Kent imports 4010 and 5010 tractors from the US for exhibition at the Royal Smithfield Show 1962 in London.

1963: The introduction of the 110 lawn tractor in the US marked the beginning of John Deere's entry into the groundscare market worldwide. A fully restored, working example of this pioneering lawn tractor is on permanent display in the foyer of John Deere Limited's headquarters at Langar in Nottinghamshire.

1970: John Deere Limited awarded the Royal Warrant as suppliers of agricultural equipment to Her Majesty The Queen.

1972-1974: New company Ground Control in Surrey is set up to import, market and distribute John Deere's fledgling groundscare equipment range, after earlier imports by Stanhay and a separate parts business in Suffolk.

1993: New Gator 4x2 and 6x4 utility vehicles are launched in the UK & Ireland, at September's IOG Exhibition in Peterborough. 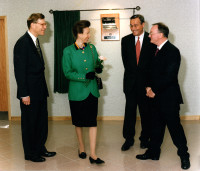 1998: New combined office premises and training centre at Langar officially opened on 13 May by HRH The Princess Royal.

2006: Royal Warrant extended to include groundscare and horticultural equipment.

All are still employed by the company today, apart from the then newly appointed division manager Graham Williams (seated behind the steering wheel), who retired at the end of 2010.

Richard Johnson (far left), then a territory manager, went on to become managing director from 2006 to 2014