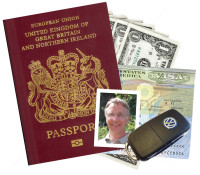 Members of the turfcare press were invited to the USA to celebrate John Deere's 175th anniversary.

The company has achieved iconic status in America, where its green and yellow livery is as symbolic of the nation as Coca Cola and Big Macs.

Laurence Gale MSc remembers to pack everything, including his camera, and, here, provides an insight into life on tour, John Deere style.

Thirty plus members of the Sports and Amenity turf press from across Europe fly out to Chicago's O'Hare airport for a whirlwind tour of John Deere facilities covering four states - Wisconsin, Illinois, South Carolina and Virginia.

John Deere are celebrating their 175th anniversary and, in that time, have grown to become one of the top 100 global brands.

After a seven hour flight we finally arrive at O'Hare, where we meet up with other press personnel from several other countries who have come in on other flights. Two press groups are attending the celebration, one representing the agricultural industry and the other the sports and amenity turf industry.

The turf brigade take a three hour coach ride to Horicon in Wisconsin.

JD's Julia Piesker, Karsten Biber, Paul Trowman and Steve Mitchell are on hand to look after our needs and ensure none of us (me) get lost. Julia uses the bus microphone to keep us informed of the busy schedule ahead.

We arrive at Horicon at 7.30pm local time; just enough time to drop our cases off before being taken out for the first of many enjoyable meals provided by John Deere.

Staying awake was our first priority, having already been up for over twenty-four hours! And we needed to remain awake during the meal and then get to bed to help get into sync with US time.

First point of call is the John Deere Horicon works. We are given an introductory talk about the 175th Anniversary, a presentation about the company's history and how the Horicon factory has developed over the years to produce a number of key JD products, including lawn and garden tractors, zero-turn mowers, Gators, greens mowers and various attachments, service parts and stampings.

The factory is split into two areas. One area is designated to pressing the raw steel into specific parts components, which are then assembled in the other area of the factory. The factory was bought as an acquisition in 1911 and, along the way, has been developed and modified to accommodate modern day manufacturing techniques.

Manufacturing processes seen during the visit include stamping, welding, painting and assembly.

Interestingly, in 2010, the five-millionth lawn tractor was produced and, in the same year, the number of Gators manufactured reached half a million.

The scale of investment on these assembly lines to keep them running to meet production targets is simply staggering.

In the afternoon we visit the historic site at Grand Detour, Illinois where the whole story began, when John Deere himself invented the Self Scouring Plough in 1837.

The original blacksmith's foundry has been excavated, showing the layout of the smithy, location of the bellows, anvil and fireplace, whilst the museum displays tools, metal shards, forks and nails from the archaeological dig of the site.

A replica blacksmith's foundry is fitted out as it would have been when John Deere started his business, and the family home depicts the quality of life he enjoyed during the early days of the company.

It was then back on the coach for a three hour drive to our next destination - Hotel Radisson on John Deere Commons, Moline.

Day two of the tour begins with a visit to The John Deere Pavilion, the company's largest agriculture museum, where we are able to see a wide range of John Deere products and get the chance to buy a few mementoes. Next stop is John Deere's Worldwide headquarters. Built in 1964, it sits on 1,400 acres of beautifully tended land. The building includes offices for over 900 employees, as well as a display floor and a 350-seat auditorium.

The building also provides a unique viewing platform above a display floor exhibiting some of their largest products. The display floor also features a one-of-a-kind work of art - a three-dimensional mural by Alexander Girard contains 2,200 authentic pieces of memorabilia dating from 1837 to 1918, spanning the company's first 75 years.

The company also has one of the largest private collections of portraiture, which are on display throughout the building.

Next stop, just a few miles down the road from their HQ, is a visit to the TPC Deere Run golf course, which is now home to the John Deere Classic, one of the PGA's top annual events.

Paul Grogan, the Courses Superintendent, is on hand to show us around the course, workshops and garages which, unsurprisingly, house every conceivable John Deere golf product. The tour of the course rounds off with a putting competition on the practice greens where, to my amazement, I win one of the prizes for best score over three holes.

After lunch, we take the long drive back to Chicago to be ready for an internal flight to Raleigh, North Carolina the following day, for the next round of visits to John Deere operations.

Chicago has a world famous reputation for being the Blues capital of the world, so the evening was spent in the House of Blues, a restaurant and live music venue.

Our flight to Raleigh was not until the afternoon, giving us the chance to have a guided tour of Chicago, which is a truly breathtaking city. We visit the tallest Marilyn Monroe statue in the world, before having a wonderful lunch on the 95th floor of the famous John Hancock Building, one of the tallest buildings in the city.

The final day of site tours includes a visit to the John Deere Turf Factory in the town of Fuquay-Varina, North Carolina. Here, the company manufacture many of their commercial products, including wide area mowers, Z-Trak zero-turn mowers, front mowers and the heavy-duty walk-behind mowers as well as mowers for tees, fairways, greens, surrounds and roughs, plus aerators for greens.

We learn that over 7.7% of the company's equipment sales revenue is re-invested in research and development, and are also given the opportunity see the level of testing carried out on the products. Each one is extensively tested for performance, durability and reliability.

John Deere also value their workforce, with many of the current employees being the third generation of local families. The workplace is a pleasant and safe environment, and the company has won many awards and accreditations for their strong sustainability policies, specifically in reducing their carbon footprint, waste and recycling materials.

In the afternoon, we complete our last technical visit at the Turfgrass Environmental Research & Education Centre at North Carolina State University. Here, scientists are conducting a number of research programmes relating to sports turf. These include new Bermuda grass varieties offering better recovery, colour and vigour, and the life cycle of cut worms and how to control them in the environment to help reduce populations.

John Deere has been a keen supporter of the NCSU, releasing funding streams as appropriate, and access to their valuable resources, in terms of people and equipment, to help deliver and conclude some of the most testing trials required to improve turf quality and agriculture production.

After our final night in Richmond, Virginia, the last leg of our tour begins with a three hour drive to Washington DC, allowing us time to see the sights of the city, including the White House, Capitol Hill, the Lincoln Memorial and Grand Union Station, before catching our flight home at 6.00pm local time.

The tour was conducted at a frantic pace, as this diary will testify. Yet, it was organised with all the professionalism we have come to expect from John Deere. It was certainly a privilege to see behind the scenes of a truly global organisation.
John Deere timeline

1837 - Company founder, John Deere, fashioned a polished-steel plough in his Grand Detour, Illinois blacksmith shop. His implement was the first successful self-scouring plough. Success of the plough transformed Deere from a blacksmith to a manufacturer. He built 10 ploughs in 1839, 75 in 1841 and 100 in 1842.

1848 - The growing plough business moved to Moline, Illinois to take advantage of better water power and transportation. A year later, in 1849, a workforce of some sixteen employees built 2136 ploughs.

1933 - Business was almost at a standstill. Sales plunged to $8.7 million. Though it was losing money, the company decided to carry the debt of farmers as long as necessary, an initiative that greatly strengthened farmer loyalty to John Deere.

1956 - The company expanded its presence around the world, building a small tractor assembly plant in Mexico and buying a majority interest in a German tractor and harvester manufacturer (Lanz).

1963 - John Deere surpassed International Harvester to become the world's largest producer of farm and industrial tractors and equipment. In addition, Deere ventured into the consumer market.

1964 - Opening of the Deere & Company Administrative Centre in Moline.

1988 - The farm economy rebounded after six years of recession during which many agricultural companies failed. Deere & Company sales grew 30 percent from 1987.

1991 - Lawn and groundscare equipment operations in the US and Canada became a separate division. The company also acquired SABO, a European maker of lawnmowers.

2000 - A new tractor plant was opened near Pune, India. Deere was granted a banking licence in Luxembourg, allowing John Deere Credit the ability to finance equipment throughout Europe.

2007 - A tractor manufacturing facility was acquired in Ningbo, China. John Deere was chosen again among the world's 100 Most Ethical Companies.

2008 - Deere & Company entered into joint ventures with construction equipment manufacturers in China and India. Deere announced plans to build a distribution, replacement parts and training centre in Russia, a European Technology and Innovation Centre in Germany, and a marketing office in Kiev, Ukraine.

2010 - The company opened an assembly factory in Domodedovo, Russia and a technology and innovation centre in Germany, and expanded a research and development centre in China.

2011 - The company announced its ninth dividend increase in the past seven years. Deere was listed among the 50 most-admired companies globally by Fortune magazine and ranked as one of the 100 best global brands by a leading brand-consulting firm. The company began work on factories to produce engines, loaders, and agricultural equipment in China, and tractors and combines in India.

2012 - Deere reported record net income of $2.8 billion for its 2011 fiscal year. In addition, Deere began its recognition of the company's 175th anniversary.