0 John is a winner in photo competition 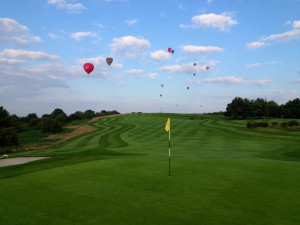 Deputy course manager John Bachelor, who has worked at Long Ashton for 12 years, received the top prize of an iPad mini. Polo shirts were awarded to the senders of the11 runners-up entries.

All 12 photographs will feature in a desktop calendar notepad which will be distributed to golf clubs around the country free of charge to provide a handy aid for greenkeepers.

Richard Brown, Amenity Sales Manager of Germinal Seeds GB, said: "We had a great response to our competition. I'd like to thank everyone who submitted photographs and showed why they are proud of their courses. It was a difficult task to pick the best one but we felt John's entry really captured the spirit of the competition."

Winner John said: "I think it is a great photo but I never expected to win first prize. I'm really pleased that it was judged the best and will feature on the front page of the calendar notepad."

The competition attracted dozens of entries from all over Britain and was aimed at greenkeepers to spotlight what makes their courses such special places to be.