by Rosie Duckworth
in Industry News
on 22 Oct 2013 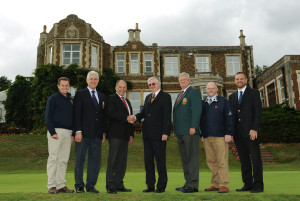 In what is described by the club's treasurer Brendan Roulston as a "major capital investment" in the course, this deal not only extends the club's relationship with Toro machinery, but also sees it invest in Toro irrigation for the first time. Hence the 'Total Solutions' tag.

"John O'Gaunt Golf Club has a long-standing relationship with Toro machinery, so when it came to that side of things we were always going to renew with Toro, as we value its quality and pricing," says Brendan.

"Toro won the irrigation deal in a competitive pitch against two other brands because we were hugely impressed with - again - the value and quality on offer."

Meanwhile it's Toro's greensmowers on which the club plans to spend the bulk of its 2014 machinery budget. Details will be announced later.

"This is a big investment for the club," concludes Brendan. "But one we feel more than confident making in partnership with Toro."