Greenkeeper Steve Thompson has hit the magnificent seven with his wildflower establishment at the John O'Gaunt Golf Club. All seven native perennial species sown as part of the course's Operation Pollinator habitat creation have flowered in their first year - an exceptional result that is testament to the techniques he's employed.

And, despite this season's dull, wet summer conditions at the Bedfordshire club, the area has been alive with the buzz of bumblebees and other pollinating insects that have been attracted into the area. Sited between the fairways of the 6th and the 13th holes of the long established John O'Gaunt course, the attractive wildflower area is clearly visible for players teeing off either hole.

Working with Course Manager, Nigel Broadwith, Steve said the area was especially selected to be where it would be seen by lots of players, and to create a focal point that would raise awareness of all the environmental work being undertaken by the greenkeeping team. "We 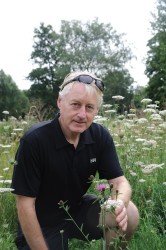 wanted an area that would be an integral part of the golf course and a part of the experience of a golfer's round, but was also out of play rough that would be relatively undisturbed," he said. "Being close to the tee, it would take a really wayward shot to end up in the wildflower area. But, it creates a lovely sight and added interest to discuss as they set off down the fairway."

John O'Gaunt club member, Phil Cottier, believes the initiative has been highly successful in generating interest among players. "The quality of the greens and course remains the key factor but, if you've had the extra pleasure of playing in a natural environment and having been part of an initiative to encourage wildlife, then it makes it all the better."

Having had a long-standing interest in birds through his work career with the RSPB, Phil is now enjoying learning more about the bees too. "Most of the members that I've played with do have an interest in the environment and what the club is doing. If we see something interesting during a round it adds an extra dimension to what we get out of the game," said Phil. Although he acknowledges that is more for some players than others.

He believes the information boards put up by Steve and the team, plus articles in the club newsletter, have been extremely useful in keeping players informed of what has been done and what Operation Pollinator is looking to achieve. "But, it is important to keep members up to date with what's going on, especially any successes that have been achieved," he added.

Steve reports that he has been highly encouraged by the response from members and by the club's managers, for whom the environmental assets and features of the course can be a positive attraction for members and visitors. "We were very aware that we didn't want a flower area that would look artificial and contrived, but would be an attractive addition to the course. By selecting native perennials that would typically be found in a parkland setting, the effect has been to inject some colour and interest that looks entirely in keeping.

"As we establish more wildflower areas around the course, the aim is that it will add to the experience of playing in a natural environment," he said. Steve is also looking to add to the wildflower mix with other species that would naturally occur and thrive in the area, which will provide additional sources of pollen and nectar. Areas of harebells that are doing particularly well on the course will be extended, for example. 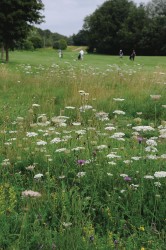 The three suggested Syngenta Operation Pollinator wildflower mixes - for parkland, heathland or links courses - have all been selected to provide a core of wildflower species that are known to be robust and relatively easy to establish under a range of conditions. However, he welcomes the fact that it is not a strict prescription and can easily be supplemented with other species deemed to be desirable on any course.

Steve recalls that the establishment guidelines provided at an Operation Pollinator training workshop, and on the initiative's website, gave valuable practical pointers to what he should be doing. "Actually, seeing the extent of the scarification required to create the seedbed, with 60% to 70% bare soil, was quite dramatic - but gave us the confidence to try and achieve it in the autumn," he added.

The designated area was cut back in October and then scarified with the club's own machine. Steve then sub-divided and mixed the seed with dry sand, which he hand-spread across the surface. Although a relatively slow process, it was this attention that may have been key to his success; as wildflowers simply shed their seed on the surface he mimicked their natural process, when drilling into the soil would have buried most seed too deep to germinate.

The open autumn of 2011 and warm soils through November and December certainly helped with early seedling establishment. However, it also meant there was competition from thistles and thick grass in some patches. Steve took the decision to strim back these patches aggressively in the late spring, to look neater and avoid the thistles setting seed. In fact, this also served to encourage the sown perennial native wildflowers to tiller and spread, making them thicker and even more successful in these areas. This technique of repeated cutting in the first year can prove especially useful to establish perennial wildflower seed mixtures, which go on to perform better in subsequent years.

Some bare patches do remain where no wildflowers or other seeds established. It is clearly evident, however, that these bare areas were associated with very thick thatch and high levels of organic matter at sowing. The likelihood is that these areas dried out in the early spring and prevented the wildflower seedlings from establishing.

This has reinforced the importance of deep scarification to remove organic matter during the seedbed preparation process, to ensure surface soil contact with the seed. The scarification can also trigger the germination of wildflower seeds that occur naturally in the soil seedbank.

However, all is not lost in these bare patches, since seed shed from the sown plants this year will spread and fill the gaps in future years as the thatch breaks up. Also, many of the bumblebee and mining bee species that have been active in the new habitat require areas of dry, bare soil in which to burrow and make nests for their winter survival.

Steve does admit some relief that the area has established so well in its first year. "We were well aware from previous attempts at wildflower establishment that it may take a few goes to get it right, but it has already exceeded our expectations.

"There was certainly some scepticism among the greenkeeping team with results during the spring. But, as it has come into flower over the summer, it has become something we are all taking pride in. It fits really well with all the environmental work that we were doing for the birds, and now the bees." Over 120 bird nest boxes have been put up around the course, including designs for barn owls and songbirds that will also benefit from the habitat creation.

During one morning in August, five different bumblebee species could be seen actively foraging among the wildflowers in the area, along with numerous other pollinating bees, hoverflies and other insects. A summer social evening for golfing members and their families, to look at bee identification and explaining the role of Operation Pollinator and other environmental initiatives on the course, is now being considered to further build on player engagement with the project.

Steve and Course Manager, Nigel Broadwith, have already earmarked further areas where Operation Pollinator wildflower mixtures could be established on the course, which is one of the UK's largest private members' clubs with two courses, totalling over 12,000 yards.

Conscious of the cost implications of buying seed, they are now looking at the potential to gather seed from a late summer cut of the existing area, to spread on to further areas that will be first cut down and scarified. Having thinned out the rough by cutting, removal of clippings to reduce fertility and the use of Rescue to produce more open Fescue swards, along with the introduction of wildflowers, it is hoped that a single cut and removal of clippings in the autumn will be all the future management required.

Nigel added: "We are always seeking ways to manage rough more cost effectively, especially after the difficult conditions this year. If we can create areas that can be managed more easily, whilst also creating features that are more attractive to players and wildlife, and that doesn't have any adverse effect on playability of the course, it is a real win win situation for all involved."

Operation Pollinator was set-up by Syngenta to help golf courses across the UK and Ireland to provide essential sanctuaries for bumblebees and other beneficial insect species. Environmental enhancement of relatively undisturbed out of play areas can provide the perfect location for immensely valuable ecological habitats.

The project's support initiatives give greenkeepers and golf course managers the tools and skills to successfully and cost effectively establish and manage attractive wildflower resources that are crucial for bumblebees and pollinating insects.

Guidelines and practical advice has been developed in conjunction with specialist ecologists and agronomists from the Sports Turf Research Institute.

New opportunities that Operation Pollinator creates for golf clubs include: