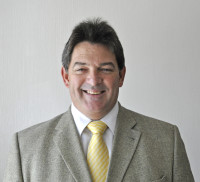 John Quinton, Ransomes Jacobsen's former Regional Sales Manager for the southwest and northwest of England and Wales, has been promoted to the position of Sales Manager, UK and Ireland with immediate effect. Reporting to Sales Director Rupert Price, he will be responsible for business development, equipment sales and dealer support throughout the UK and the Republic of Ireland.

John, a graduate of Harper Adams University College in Shropshire where he gained a HND in agricultural engineering, joined Ransomes Jacobsen in May 2010 from Hayter Ltd, where he held the position of Territory Manager West. Prior to this he spent a year as Sales Manager with RS Bird, Ransomes Jacobsen's former turf dealer in south Wales, and three years with Glendale, based in Preston , as a Supervisor and subsequently Machinery Manager.

Before coming to the United Kingdom, John farmed arable crops in his native country, Zimbabwe. He currently lives in Monmouth with his wife Victoria and their two daughters, Sophie aged 6 and 4-year old Emma, but will be relocating to Suffolk in the near future.

Commenting on the appointment Rupert Price said, "John has only been with business for a short while, but in that time has impressed everyone with his drive and determination. His rounded experience of the turf industry will certainly be an added strength together with his undoubted management skills that are a requisite for this demanding post. I am delighted to congratulate him on his appointment."