Bristol Rovers Football Club may be on the verge of building a new stadium but the existing one has benefited greatly from the work of Head Groundsman, Eric Kingscott. After a poor showing from the seed sown in 2012 Eric commenced a search for the best seed for his venue, and Johnsons Sports Seed J Premier Pitch and J Rescue came up trumps.

Eric has been Head Groundsman at Bristol Rovers for 2 years - his first appointment as a Groundsman having worked previously in agriculture and domestic landscaping. He is only supported by one part-time person to maintain the pitch, which is also home to Bristol RFC. An NVQ Level 2, completed last year, pushed him towards this career path.

The pitch is of native soil construction with ameliorated sand and has no rootzone reinforcement or secondary drainage. The seed used for the 2012 season was slow to start; provided poor wear tolerance; had little recovery and no decent presentation, and then when winter came it didn't like the cold weather!

"I decided to look through the seed catalogues for an alternative" said Eric. "I was looking to find something that would fare better during cold weather, as well as having high disease tolerance and quick recovery. It took a lot of homework but I managed to narrow it down to a Johnsons Sports Seed mixture." 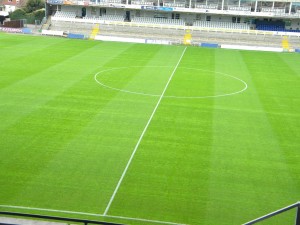 The Board asked him to speak to other Groundsman who had used the seed in the past and Reading, Aston Villa and Manchester United all recommended it. Eric was, however, conscious of different weather conditions in the different parts of the country so was still a little reticent. So, with the Boards' understanding Eric sowed J Premier Pitch and J Rescue on a trial basis to see the true effectiveness. He was not disappointed.

The pitch has held up well despite the wet weather this past winter. Eric again, "It has been hard wearing and quick to recover after the games held during the bad weather. It is the ideal grass seed to use for a dual-sports pitch as we still have Rugby matches here. Altogether the pitch has seen 53 competitive games since being sown. It has exhibited good disease resistance with only a bit of leaf spot that has been treated by an external contractor. That necessitated a bit of scarification and overseeding. We'll sow J Rescue in September/October as we did last year."

The Club is hoping to move to a new ground within 2 years and Eric hopes to be closely involved in the preparations for the new pitch.