Sitting smack bang in the middle of a triangle formed by Manchester, Rochdale and Oldham lies The Manchester Golf Club at Hopwood Park, an 18 hole championship course designed by eminent course architect Harry Shapland Colt. The course is predominantly moorland in character but also has heathland and parkland features.

The course is set in just over two hundred and forty acres and, off the new blue tees, measures 6650 yards. It has some wonderful views and makes the most of the landscape. The club was recently nominated as a finalist in the 2010 Golf Environmental Awards.

Hopwood is a popular venue on the North West Open Event circuit. The Hulbert Trophy is played annually as part of the Northern Order of Merit and the club plays host to hundreds of visitors in its renowned Festival Week, when a series of Open competitions are played back to back over six days in late July and early August. Ladies, Seniors, Juniors and Mixed are all accommodated in their own Opens during the course of the golfing season. 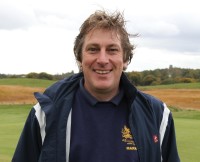 The course consistently features in the 'Best of …' golf guides, and has played host to various events, including the Lancashire Amateur Championship (which returns in 2011), The PGA European Tour Qualifiers and The Player's Tour. It is widely considered to be one of the finest inland courses in the North West of England.

The club moved to Hopwood Park in 1912 and, apart from a few minor modifications, the general layout has remained much as Mr Colt originally designed it.

Course Manager is Mark Jones, who has been at the club eight years. He is assisted by five staff - Deputy Head Greenkeeper, Richard Morgan, Matthew Shimwell, Andy Phillips, Arron Watkinson and mechanic and longest serving employee, John Glover, who has been at the club over twenty-five years. Mark's son Chris, who used to be a member of the team, still comes in and helps out on an ad hoc basis.

Working hours are 6.00am to 2.00pm during the summer months and 7.00am to 3.00pm in the winter. Weekends are covered on a rotation basis, with three staff on hand to prepare the course - mowing the greens, changing pin and tee positions and raking eighty bunkers.

The club has invested heavily in machinery, and buy most outright, with John Glover undertaking the day to day maintenance and much of the service work, making the most of his new workshop facilities. The club also have a wash down area to keep the machines clean.

They have three Kawasaki Mules for getting around the course which Mark prefers over other utility vehicles as, he says, they cope better with the uneven ground conditions on the site.

Maintenance regimes are fairly straightforward and based around good cultural practices, sensible cutting heights and plenty of aeration, with applications of topdressings to improve surface drainage.

Mowing heights, too, are fairly standard with the greens cut at 3.5mm in the summer months and 5.5mm in winter.

Tees, collars and aprons are maintained at 10mm and 12.5mm respectively, and fairways at 14mm and 17mm. Semi rough is kept at 75mm all year round, and the rough at 100mm.

The rough is split into three areas which are managed in rotation every three years, during which time, they will be cut, scarified and collected to encourage fine grasses.

The greens are deep scarified twice a year with a pedestrian Graden, using 2-3mm blades - once in the spring and once in the autumn. They are then oversown with, predominantly, Bent, but some Fescue is used in the spring. Finally, they are topdressed with White Moss straight sand.

Through the growing season, the greens will be aerated using a variety of aerators (microtines, vertidrains and hollow core tines). They are then topdressed every four or five weeks with a straight sand dressing. The greens are oversown with more bent and fescue seed mixture to improve the fine grass content of the greens.

The greens and tees are verticut to remove lateral growth. The greens are done fortnightly and the tees four times a year. The greens are also rolled on occasions to firm them up, usually for tournament play. Mark does not use a stimpmeter so never records any green speeds. He relies on his members to keep him informed on there playability.

The feeding programme is a little and often approach using a combination of liquid and granular feeds. These are based around a base seaweed product. Mark has managed to keep nitrogen inputs below 65kg per hectare each year for the last five years, which has helped keep the greens in good order.

Tees get a minimum base feed, whilst the fairways and the rest of the course have to rely on nature's nitrogen cycle for food uptake.

Worm and the occasional fusarium outbreak are controlled with the use of appropriate fungicide products.

One of the club's biggest problems in recent years has been the control of Himalayan Balsam, which appears on the banks of the water courses, that have germinated from seeds up stream. Mark has instigated a programme of cutting, pulling and spraying to control this invasive weed but, he says, it remains a tough and ongoing battle.

The club employ the services of independent turf consultant, Robert Laycock, who works closely with Mark, visiting the course several times a year.

Working closely with the STRI, and other agencies, Mark is carrying out work to re-establish heather and gorse plantations, control bracken and remove swathes of unwanted trees - approximately 6,000 trees over a 5 year period. The aim is to restore the course to its original moorland nature The club has invested in their own chipper to get rid of the brash, whilst the cord wood is stacked in piles in and around the course to provide shelter for mammals and insects.

Manchester Golf Club has an abundance of wildlife, expertly captured on film by one of their members, Gordon Yates, who specialises in wildlife photography for a living. With over forty-six species of birds and a variety of mammals, it certainly keeps him busy.

Out on the course there are outcrops of sandstone that provide a home to a breeding colony of sand martins, the smallest of the European hirundines which includes house martins and swallows. The greenkeeping staff have to ensure the face of the outcrops remains free of vegetation so, a couple of times a year, they strim around them. Hopwood also hosts the largest b

reeding colony of swallows in the north west

Mark also provides a feeding platform for buzzards, with the local gamekeeper supplying a ready supply of rabbits, the staple diet of these splendid birds.

Although the course does have an automated watering system, it is mains water supplied. So, to reduce costs, Mark is currently undertaking a project to set up a grey water cleaning system that is designed to filter and clean water for use on the course. Water will be pumped up from the stream and stored in tanks and cleaned ready for use. The project is expected to go live this year, once they have installed the transfer pipework and pumping system.

During the winter months, the greens staff carry out refurbishment work. This has seen the club make considerable cost savings in recent years. For example, a recent drainage and bunker rebuilding - eighty in total - has saved the club over £150,000 in labour costs alone.

The course redesign was planned by Hawtrees', the acknowledged experts in Colt courses. They provided the plans and all work was carried out over a three year period in house by the greenstaff. This included the re-modelling of two greens, six new tees, 76 new bunkers, the filling in of 23 bunkers and the re-alignment of three holes

The management has, in return, provided the greenkeeping staff with a new workshop and mess facility, along with supporting Mark's requests for equipment and materials.

Given that the course is located in the M62 corridor, membership remains buoyant and offers a refuge from the hustle and bustle of the nearby conurbations. The quality of the course is a credit to Mark and his team.