I grew up in Pudsey, a town directly between Leeds and Bradford. During my childhood in the 1970s, Leeds United were - as cited in 'Zigger Zagger', a popular schools musical of the time - 'invincible'. I and all my friends were devoted supporters. In fact, many of us still are, in spite of Leeds temporary forty year decline from those great times. Occasionally, I even went to matches at Elland Road, but I had many other interests, so I would never call myself a fanatic, then as now.

I was fortunate to have quite a big garden for playing in. This was sufficiently large for us to throw down our pullovers, or stick some of dad's garden canes into the ground, to make one pair of goalposts and a handful of us could play 'attack and defence'. There was also a wall to kick balls against which facilitated another football game called 'spot'.

Just a few hundred yards away there was Queen's Park, an area surrounded by houses that had three or four football pitches marked out on it. Queen's Park had some trees around the edges, plus a steep slope at one side that, it seemed, almost everyone in Pudsey came together for sledging when there was sufficient snow on the ground. I seem to remember talking to some real girls during one summer under those trees; that must have been a very educational experience. 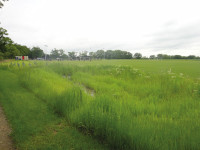 A footpath crosses the area connecting rather posh Tofts Road to the more working class Waterloo council estate. My friends came from both these areas. During the football season, and if there were enough of us to make it worthwhile, we'd take a football over to Queen's Park and play to one of the goals. Sometimes they had nets. This was tremendously exciting as we didn't have to trail off thirty yards behind to get the ball every time a goal was scored - which was often because, for nine year old boys, full size goals are massive.

I'm so glad that Queen's Park is still there and seems to be more or less the same as it was then, though my garden, rather sadly, now supports a set of flats. I hope Queen's Park has continued to provide memories for the many children that have grown up around it since I did; I'm sure it has.

I could go on and on about my childhood, because it was great, but I'll spare you all of that and get to the point of this article. Combined with my grown up and professional experiences of sports turf consultancy over the last twenty-odd years, I have realised that public open space is actually crucial to the very fabric of our society. It provides places for organised teams to play sport, of course, but it serves many other purposes simultaneously; it is very much more than the sum of its parts.

It is right and proper that our industry should constantly strive to improve playing quality standards on sports pitches, and we devote a great deal of time and effort to doing just this. I believe passionately, however, that the design and formation of these public open spaces must also address the wider purposes that they serve.

If you use every available square metre of a site for the marking out of pitches, you will certainly be providing for those groups that will use that site for organised sport. Squeezing in additional mini-soccer pitches will serve all of the children that attend the clubs and play at weekends very well. Most of the time, however, those pitches won't actually be used. During the week, the kids will play on only one or two pitches - and probably just at one end - on an informal basis on the way home from school, after tea, Saturday morning. As for the kids that don't participate in organised sport, the ones not in the clubs, these pitches are more or less useless; bleak and windswept spaces to be avoided, feared even.

What we, as designers of public open space, must cater for are all of the users of a site and not just those already involved in organised sports. Indeed, by making sites more attractive to non-sporting people those very people might, seeing the sport that is taking place nearby, become interested anyway and take it up on a more organised basis. 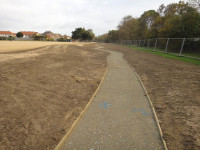 In practice, what this means is relinquishing a little of the space available and developing it specifically for these other purposes. Some examples of how this can be achieved follow.

Properly constructed footpaths, that don't become quagmires each winter, can link different communities so that open space becomes a connection rather than a barrier. As the footpaths weave amongst the various sports surfaces, pedestrians on them may sometimes dawdle to watch an organised sport taking place. That looks fun. I think I might give that a try…

Make room for some trees. Of course, these must be located so they don't interfere with drainage systems and, of course, must not be allowed to shade the playing surfaces. But try selecting species not just so that the leaf fall doesn't affect the pitches, but perhaps because they're easy to climb and fall out of. Try to envisage that nine year old boy having his first conversation with the girl from the other estate underneath these trees.

Leave areas of longer grass. Those triangles in odd shaped corners will be difficult to mow anyway and will never be used for organised sport, but they could provide a home for an entire community of insects and wildflowers. 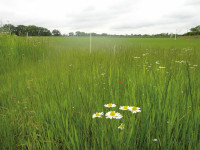 Children need to feel what it's like to kick through the slender seed heads of a sward of fescue in June. Maybe they'll spot their first grass snake in there, or catch grasshoppers in September. Later in life, perhaps they'll develop their relationship with the girl from the estate one warm July evening.

Drain trench arisings can be very useful for creating mini-landscapes that can be adventure playgrounds for kids. You'll save money also by not having to cart it away and, whilst this material isn't good for growing good quality sports turf, trees do very well in it and a reasonable grass cover can always be created. Maybe try a wildflower mix, or create a dense shrubbery, fantastic for hide and seek. Oh, and birds will like to fly into it and nest too.

Whilst on the subject of drainage, have a look at your outfall. A pipe can go straight into a ditch of course. Since you'll have excavators on site, however, why not scoop out a little of the ground before the ditch and discharge your drainage into this. A nice big connection to the ditch will make sure the scoop never fills with water, though it will be wet a lot of the time in there. This, again, creates another good and safe environment for kids to discover and play in. They'll get really muddy. It will also establish a totally different community of wetland species of plant and animal. That's called biodiversity; that's good, that is.

These are some of the things you can do with public open spaces whilst you are establishing formal natural turf sports pitches on them. By using a little imagination and broadening one's perception of what these spaces are meant to do, it is possible to enhance the life experience of many more people than just the ones involved with organised sport. At the same time, you are making participation in organised sport a more attractive 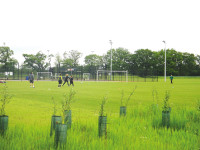 proposition by actually bringing it closer to, and integrating it with, the wider community.

This is all natural turf stuff of course. Steel fences, three metres high around artificial sports surfaces, are not much good to anyone, apart from those lucky few that are able to actually get inside them.

Take your jumper off. There's a ball here. Do you fancy a kick around?