Instead of Hampshire hosting Kent in the season-opening County Championship fixture at the Ageas Bowl this week, there was just one man and his dog on the outfield. 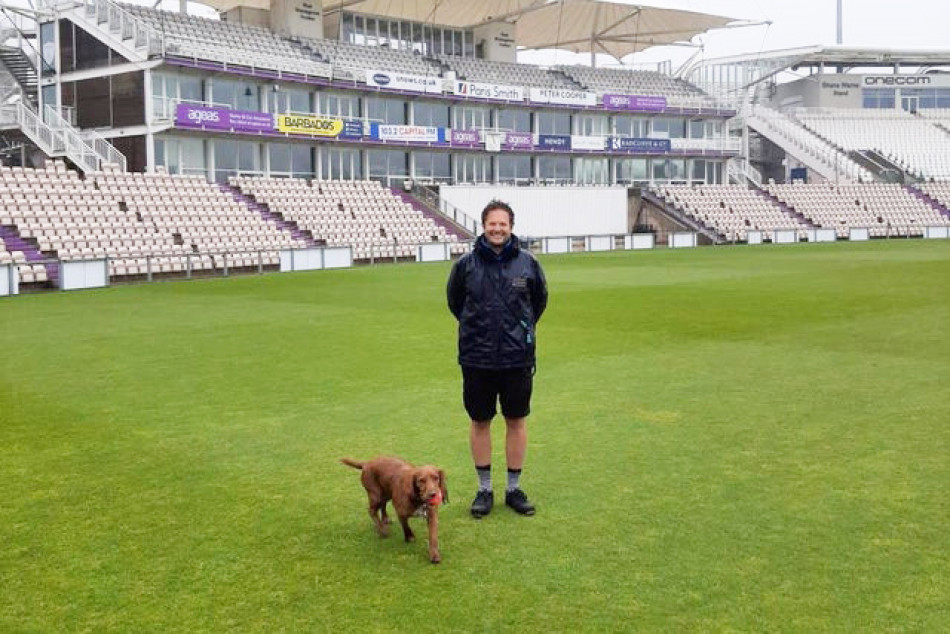 New Hampshire groundsman Simon Lee with his dog at The Ageas Bowl Copyright: Other 3rd Party

Multi-award-winning Lee has taken over from Nigel Gray at the Ageas Bowl having been associated with Somerset for 20 years.

Lee worked his way up from apprentice to head groundsman at Taunton - the role he held for the past decade.

Hello, this is the first of your 5 free articles for this week

'I'm a Somerset boy so it was a massive decision to make,' Lee said. 'I could have happily stayed as there was no particular reason to leave.'

'But opportunities don't come around very often, especially with such a big site and the chance to improve somewhere which is an international ground.'

Like Lee, Nathan Lyon, who had his contract cancelled last week, was due to make his Championship debut for Hampshire this week.

And the highest wicket-taking Australian Test off-spinner - who was himself a former groundsman in Adelaide - would have been in Lee's mind when cutting and rolling the pitch, but not necessarily at the forefront.

'We were going to have Nathan Lyon, so we were going to play on decent decks because we thought he was probably the best spinner in the country so he would get the most out of it,' Lee admitted.

'But you've got to score bonus points with batting as well as bowling and winning games. So you need to be able to play on good decks to get the runs to help you get those bonus points in the championship to be up at the top of the table.'

'You have to back yourself to bat on some wickets and it isn't just Nathan Lyon to produce for, we also have a decent seam attack who are capable of taking 20 wickets.'

'To be perfectly honest at the moment, though, who knows what the pitches will be like if we get any cricket this year?'

Lee arrived at the Ageas Bowl with the honour of having won back-to-back ECB Groundsman of the Year awards for one-day cricket and a perhaps undeserved reputation as the mischievous hand behind spin-friendly wickets which helped Somerset finish second in the Championship in three of the past four seasons.

But Lee was quick to point out that those 'poor' wickets were rare but provided a mental advantage to his employers.

'I understand the hoo-ha that goes around working at Taunton,' Lee said. 'But that generally comes from probably about a handful of pitches over 10 years.'

'Those stand out more than the ones which are just good pitches and there was a result and therefore no chat about it.'

'Our pitch marks were really good. I actually got a better pitch mark average in four-day cricket at Taunton than Hampshire got here at the Ageas last year. The perception of it isn't the same.'

'Everyone would turn up and go 'crikey, what are we going to play on?'. So they would be more worried about that than actually playing the pitch. You work those angles into your advantage.'

The lockdown restrictions, coupled with the lack of cricket, has come at a good time for Lee - who started in January.

It has allowed him to take time learning about the Ageas Bowl's unique quirks, catch up after a wet winter, and put his own spin on the square.

'For me starting afresh, it has been difficult because I haven't been able to do much work on the ground to get used to the place and understand how it works because of the rain,' Lee, who has been assisted by deputy Tom Cowley during quarantine, confessed.

'We've basically just been cutting grass for the past few weeks because everything grows so quickly now - which is taking about a day a pitch.'

'We have reseeded all the squares over the past month. This is a really good opportunity to improve the surfaces.'

'There is not usually much time to let cricket squares grow and be natural. Usually, you are straight out of winter into seven months of games.'

'We can improve the surfaces by digging up the grass on the surface and getting better root depth and growth which can hold the soil together more and give us more pace and bounce.'

'The one thing I haven't done so far is preparing a pitch! That's the only thing I'm really in the dark about - do the things I did at Taunton react the same here?'