Justin Holbrook says there is one positive to Saints having a blank weekend and just one home game in the opening month of Betfred Super League 2018 - the newly laid pitch has chance to improve! 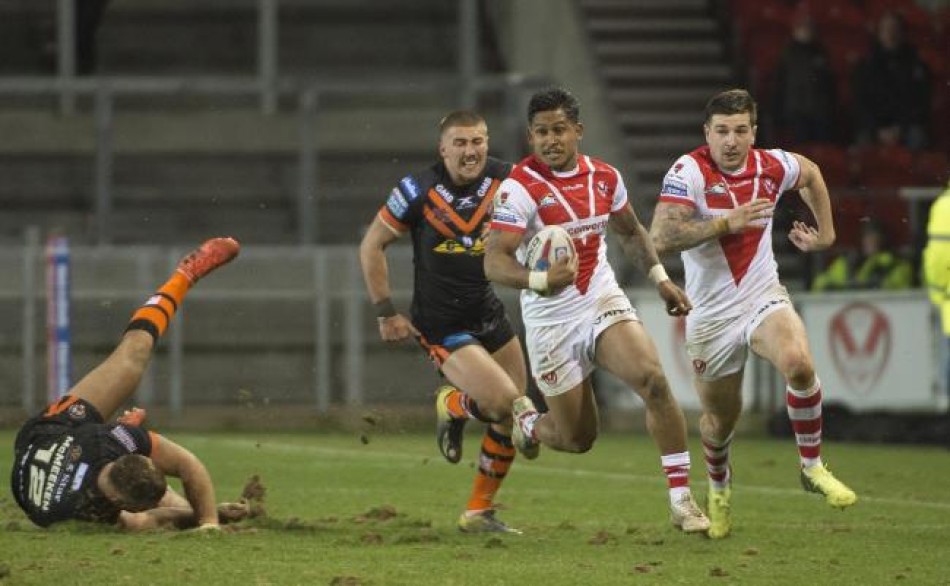 The pitch can be seen cutting up as Ben Barba makes a break against Castleford Tigers. Picture by Bernard Platt

Saints head to France this weekend to face Catalans Dragons in Round Two but are then without a fixture as the World Club Challenge takes place between Melbourne Storm and Leeds Rhinos Down Under.

A second successive away game follows on February 23 before Saints return to the Totally Wicked Stadium against Salford Red Devils on March 2.

"It's not ideal," said Holbrook about the scheduling.

"Once you start you want to keep playing. Either keep playing or start the comp the week after that third round would make more sense.

"It is what it is. It'll be nice to get another win this weekend and put the feet up for a week and start again - that's all we can concentrate on.

"We'll train through next week, we're only two games into the competition so there's no need to have any time off.

"It's not ideal for the home fans to go a month between games but it's the way it is.

"Hopefully if we can put in two good performances before we come back home that can add to the excitement of our next home game so I'm ok with that."

The newly laid pitch cut up during the friendly against Leigh Centurions and again versus Castleford Tigers in Super League Round One on Friday.

An earlier friendly against Sheffield Eagles was switched to Ruskin Drive to try and give the turf longer to settle before the season started.

Holbrook added: "Our pitch is struggling a bit at the moment so it'll be nice to give them four weeks to improve on it for our next game.

"Hopefully it can get better, for the sake of the game and both teams that are playing on it.

"We dug it up completely, so it just needs time to try and get right.

"Warmer weather would help the grass grow. We don't have the Premier League budget to get the heating lamps on it. If anybody knows anyone that can donate those to us it would be appreciated."

You can read the original article from St Helens Star HERE