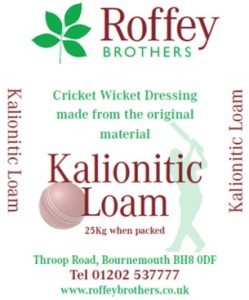 Roffey Brothers are pleased to announce that having successfully manufactured and supplied Kaloam for three seasons they are now changing the name to Kalionitic Loam.

This more closely defines the clay loam that has historically been used in cricket wickets and for which Roffey has secured many future years supply. It also identifies one of the cricket wicket loams manufactured by Roffey to avoid confusion with any other products.

Kaolinite was known since the Yuan (Mongol) dynasty in the thirteenth century as "Kaolin earth" and was first properly described by Song Yingxing in the early seventeenth century in his book Tian Gong Kai Wu (roughly: Introduction to Heaven's Handicrafts). It was introduced to the West by a French priest in 1712 (de Fourestier, 2005).

It is found largely in masses - clay beds - with a whitish, pale yellow to light brown colour. In its various forms it can be used for a whole host of applications such as ceramics, toothpaste and paint additive, to soothe an upset stomach, similar to the way parrots (and later, humans) in South America originally used it.

More recently, industrially produced kaolinite preparations were formerly common for treatment of diarrhoea; the most common of these was Kaopectate, which abandoned the use of kaolin in favour of attapulgite.

It has also been used for facial masks or soap or as absorbents in water and wastewater treatment.

Independent testing continues to be carried out by Dr Russell Young MBE JP of Soil Science Wales and current results will appear on the Roffey website or are readily available from their office.

Roffey often have a higher soil strength than any other loam produced which, combined with a low shrinkage rate, gives a wicket with good consistent bounce.

For new Kalionitic wicket builds the company also offer an 18mm construction material to save on costs.

In all, the company guarantee to continue producing, as one of several loams from our ISO 9001 factory, a Kalionitic Loam which is consistent with that which has been produced for over 50 years.