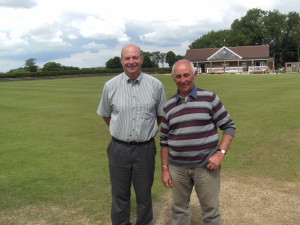 Great and Little Tew Cricket Club is located in a delightful countryside location and was founded 104 years ago.

Gordon Taylor first worked as a volunteer groundsman with the club when he was 17 years old and he was working as a farmer.

The club was using an indigenous loam mixed with marl, and fast wickets were evident, but they found the grass germination and growth very difficult so they constructed their first Kaloam square with 5 wickets 49 years ago and over the years added a further 11 wickets.

So successful were they with the first Kaloam square that they constructed a second square in the adjacent field and the word is that the new square out-performs the old square.

They were always able to collect the loose Kaloam using their own transport but found it difficult to store through the winter months and have switched to 25kg bags ever since.

Gordon has always been a passionate groundsman and has worked on a voluntary basis throughout his 49 years with the club. At the age of 41 he was made redundant from his farm and at this time he was offered the position of Head Green-Keeper at Chipping Norton Golf Club, which was a nine hole course at the time. 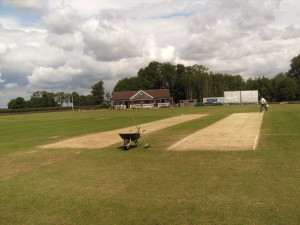 Gordon loved the outdoor life and sourced all of his top-dressings from E. A. Goundrey & Son Ltd. He had no formal knowledge of groundsmanship when he began, but his passion and dedication allowed him to improve and develop the club over the next 19 years until the line between doing, and paperwork, were indistinguishable.

At this time, Gordon moved to another golf club so that he could spend more time as a hands-on Groundsman. It was a surprise to Gordon that he was ever offered the position of Head Groundsman since he did not even know where the club was situated. He was offered a position based on the success of his work at the Little & Great Tew Cricket Club.

Much of Gordon's success has been due to his ability to work with the weather and to understand the materials and structures that he worked with. He was recently concerned about the supply difficulties regarding Kaloam and where to source a compatible material for his cricket squares that would enable him to maintain the performance criteria of a fast and true wicket giving a good bounce.

Needless to say, he was extremely relieved to learn that Roffey Brothers of Bournemouth were producing the identical product from the same source and to even higher and more exacting standards. The success of the club is inspirational with the main square having sixteen Kaloam wickets and the second square having a further seven Kaloam wickets. During the construction of the second square and the addition of the ten wickets on the main square, Gordon proudly proclaims that they were all constructed using the heel and toe method. 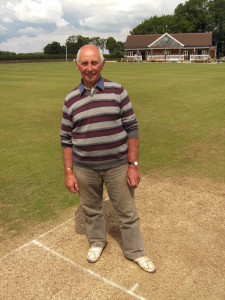 The Great Tew & Little Tew Cricket Club, which is reputed to be one of the best in the county, hosts numerous league matches to include: Oxfordshire under 17s, under 15s, under 13s and the Oxfordshire over 50s as well as many prestigious events and finals.This includes a 3 day Oxfordshire minor counties game for the third successive year! Gordon's success with the squares means that players actually approach the Club for membership, and the Club now enjoys a strong membership with four teams playing numerous mid-week and Saturday matches.

There is a junior membership of 130 and a total of eight coaches are responsible for their training and development. Gordon states how it is important that the preparation of wickets and the facilities for the juniors is taken every bit as seriously as for the seniors. Even when he has prepared all the wickets, Gordon is at the ground talking to members and away-teams alike, learning all the while and enjoying the extensive catering facilities available.

Cricket must run in the blood with two of his grandchildren now playing for county teams and he is assisted by Kevin, his son, and Eric who married Gordon's cousin.
Gordon's devotion to the club and his passion for Kaloam for the past forty years or more is a truly inspirational and remarkable achievement and Roffey Brothers are privileged to be a part of the future.