0 Keep water, not budgets, flowing down the drain 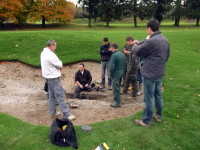 One of the biggest-ever orders for patented British innovation, Bunker Plug, is being installed at The Evian Masters Golf Club, France, host of the 2013 Evian Championship, the first women's Major golf tournament to be staged in continental Europe.

Formerly known as the Evian Masters, the event has been held since 1994 at The Evian Resort, located in a spectacular position on the shore of Lake Geneva.

To meet its new status as a women's Major venue, and provide the players with a fitting stage for world-class golf, the Evian golf course has been remodelled and upgraded over the past 18 months to designs prepared by European Golf Design (EGD), Sunningdale, Berkshire, who have overseen the project from day one.

Included within the upgrade specifications were more than 80 Bunker Plugs to be installed in all of the golf course's bunkers to help prevent flooding during periods of prolonged or torrential rain. The order for Bunker Plugs was placed by EGD with distributor, MJ Abbott Ltd, and delivered to The Evian Resort in autumn 2012.

"Having given the presentation that led to EGD placing an order, I was very pleased to see the project through to the installation of the very first Bunker Plugs on the course," commented Jeremy. "I am delighted that Dave Sampson, EGD's project designer, appreciated the benefits of Bunker Plug in helping prevent flooding of bunkers while also reducing maintenance time and costs significantly.

"Other golf course applications for the product include surface drainage in problem areas on fairways or as interceptors connected to channel drainage across cart tracks, eliminating the risk of blocked surface drainage or contamination of existing drainage pipes."

Explaining the background to EGD's selection of Bunker Plug, Dave Sampson pointed out that all of the existing bunkers on the golf course had been remodelled during 2012's work programme, with new bunker complexes being added to a number of fairways. 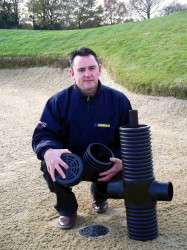 "The bunkers at The Evian Masters Golf Club have suffered regularly from flooding and drainage problems, especially during the winter season," explained Dave. 'As part of our design brief, we were tasked with finding a cost-effective solution to this problem'."

"Installation of the Bunker Plug unit in the new bunkers will most definitely improve drainage performance, but one of the main reasons we specified the product is because of its flexibility," he said. "Giving the golf club the ability to raise the Bunker Plug to the surface during the wintery wet season and then lower it to subgrade level during the drier summer high season is a major plus point in the product's design."

When lowered to bunker subgrade level, the Bunker Plug's grille can be replaced by a porous cap which allows the unit to be covered by sand, hidden from golfers and TV cameras, while still retaining the ability to remove water satisfactorily in the event of torrential rain. Changing from one position to the other takes just a matter of minutes.

Jeremy Parkman pointed out that, despite the language barrier, everyone who attended his Bunker Plug training sessions was impressed with its ease of installation and maintenance. A unit was installed in a new bunker on the 1st hole in less than an hour.


With average annual rainfall of just under a metre, The Evian Masters Golf Club is looking forward to significantly reduced bunker flooding and associated maintenance costs.

Treated bunkers can be pushed up and raked within hours of heavy rain without the requirement for labour-intensive pumping-out and subsequent contamination of fairway surfaces and potential damage to mower blades.