0 Keeping his own council! 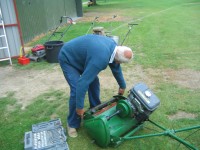 I arrived at Ilminster Recreation Ground to find John Pallister, Head Groundsman of Ilminster Cricket Club, knelt over an ageing Ransomes Auto Certes with a hammer. "Height adjustment is broken," came a muffled voice. "I'm not surprised," was my initial thought!

A few tweaks and thumps later and the adjustment had been made. An outstretched hand greeted me; "Peter from Pitchcare, I presume?"

I was alerted to the club by a news item carried on the Pitchcare website about vandalism to one of the club's sight screens, and the comments made by John and the club's chairman, Jim Sainsbury; "fuelled by alcohol"; "simple minded individual"; "mindless vandalism a form of recreation"; "latest in a string of vandalism incidents" etc. So, I went to find out why a small, rural town in Somerset should be suffering, and what steps the club and the authorities were taking to resolve the issues. 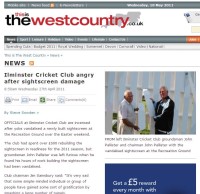 John moved to Ilminster seven years ago, after being "retired through ill health" from his position as Head Gardener with Lymington Town Council in the New Forest. "At the time, I had a mortgage, so my wife and I decided to move west to buy a property that would leave us mortgage free," explains John. "One that fitted the bill was here in Ilminster."

So, how did he end up becoming the town's cricket groundsman? "I was walking past the ground one mid August evening when I noticed a couple of people working on the square. I had always thought that it was a council run facility, but council workers don't work in the evenings! So, I popped over to ask for a fixture list. 'Why do you want one of those, there's only a couple of games left?' came the reply. I explained that I wanted the secretary's telephone number so that I could offer my services. To cut a long story short, they bit my arm off."

John had previously been head groundsman at Pywell Cricket Club, just a couple of miles outside Lymington, a job he did on a voluntary basis for twenty-one years, so his experience was welcomed by the Ilminster committee.

The recreation ground is split into three distinct areas; a football pitch and two cricket ovals, plus a couple of tarmacadam tennis courts and mini grass football pitches. The area is surrounded by modern houses, yet some of the views across the adjoining countryside, and to the town on the hill, are splendid. The area is popular with dog walkers. 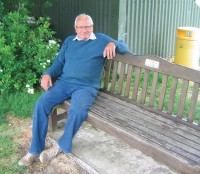 The football pitch, cricket outfields and other grass areas are cut by the council, leaving John to concentrate on the squares.

The main square has fourteen tracks. The centre five are reserved for the 1st XI, the end three for juniors, evening matches and practice, and the remainder for the 2nd XI. "It was, previously, the Ilminster Grammar School playing field, and is owned by the Ilminster Education Foundation so, if we want to do any development on the ground we have to get permission from them and from the council," explains John.

The second square, in Britten's Field, has six tracks and is used by the 3rd and 4th XI.

Both squares are built from Kaloam, except for one track on the main square which is Ongar. "I inherited a square that was 'low and slow'," says John. "I was told that the Ongar strip, now known as the 'hard strip', had been put in to try and rectify the problem. It was dug out to a depth of nine inches and filled with the loam. I did explain that they could have done that 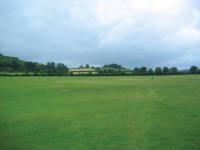 completely differently, and achieved so much more, with that amount of loam."

"However, it is now my task to improve the rest of the square. There is, or was, a break just 1.5" down, which took all the life out of the ball. So, last year, I began the task of punching through the break, using a Groundsman 345, off the Somerset Cricket Association (SCA) trailer, and back filling with Kaloam. The damn thing arrived with worn tines and would only penetrate two inches, so I had to replace those. I eventually managed to get down about six inches with the new tines!"

"You can now see where the grass is stronger in the tine holes, so I'm expecting my methods to have made an improvement. Time will tell."

John gleans his advice from his fellow groundsmen on the SCA and from Gordon Gill, who is well known to Pitchcare members for his sound advice on the Pitchcare message board; "he never stops talking though," says John with a smile.

Separating the football pitch from the main cricket oval is the groundsman's workshop, and a clubhouse affectionately known as 'the shed'. 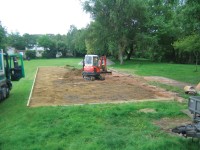 "I won't take you in there, it's well past it's sell-by-date but we are hoping to redevelop it in the not too distant future," laughs John.

However, the shed generates, during the cricket season, a profit of around £12,000, which is all poughed back into the cricket club. A similar amount is raised by the football club during their season.

This year, much of that profit is being spent on new net facilities consisting of two artificial strips. These are being installed by Exclusive Leisure Ltd. of Leicester, alongside the cricket pavilion.

"I also needed some funding for a new wicket mower," says John, "but, when I told the committee that the cost would be around £4,000, I was told to go and buy secondhand! I don't like buying secondhand, but Rochford Garden Machinery in Wincanton sourced me a 24" Allett Buffalo for £900, which I'm delighted with. It's like comparing a BMW with a Mini." I suggest that BMW actually make the new Mini, and am reminded that, at sixty-four years old, John remembers the original Austin Mini of the sixties!

We return to the subject of 'the shed' and its future. "The council are planning a new sports centre on part of Britten's Field. The outline cost is £1.5m, but it's anyone's guess what the actual figure will be, should it ever get built; £2.5m perhaps? I'm not sure that a town of just 6,000 people actually needs such a facility. And, I know that there is no one on the council that understands the cost of running a cricket and football club either. Just imagine what would happen to both clubs if the profits from the shed were to disappear overnight because spectators were using the bar in the new sports centre." 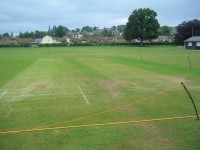 "The ECB reckon that it costs a minimum of £200 to stage any sort of cricket match. With the amount of teams we have playing here - and don't forget we have four junior teams as well as the seniors - that would equate to well over £1,200 a week. Subs and match fees would never cover that."

So, to combat what some see as the inevitable, John put himself forward to become a town councillor, and has duly been elected. Council meetings could become 'interesting' from here on in!

"They just haven't thought it through," exclaims John. "How much money do they need to take on a yearly basis just to cover the costs? I reckon at least £5,000 a week. That's £260,000 a year. It's not sustainable in such a small town." 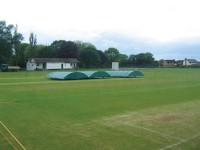 We return to the subject of cricket square maintenance - probably just in time to avoid a burst blood vessel!

"Typical match preparation is the usual ten day format," says John. "I don't tend to spend so much time on the Britten's Field square to be honest, but it plays well enough. It's a question of needs must, but the standard of play doesn't warrant it. Equally, the main square will get a thorough end of season renovation and I'll continue to improve the root depth, following the same methods as last year."

"Our 1st XI captain is the former Somerset player, Sam Spurway. We also have an overseas player - don't get me started on that! So, you can see that the standard we play at is pretty high."

Currently playing in Somerset Premier 2, the 1st XI did make Premier 1 a couple of seasons ago, a promotion that required the purchasing of roll-on roll-off covers to comply with league rules.

I suggest that these are a red rag to the vandals. "They've never been touched," says John. The vandalism to the sight screens was initially caused by lads kicking a football against them. When they broke a few of the plastic slats, they went round the other side and did the same! After the report in the paper appeared, they came back and trashed the whole screen. We have had it repaired by a local steel fabricator - they won't smash them!"

"The annoying thing is, we know who did it, but the police seem powerless to do anything, as there is no 'proof'." 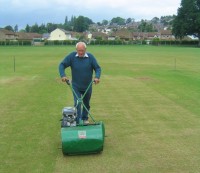 If the newspaper report was a tad sensationalist in its choice of words, is there really a big problem?

"In truth, vandalism is no worse than any other town," says John. "We've had the odd window smashed in the pavilion, but that is to be expected. We are, though, considering putting up CCTV cameras."

"As a club, we are certainly doing our bit to encourage youngsters into the game, and we have a really strong junior section."

So, my initial reason for visiting didn't come to much, but it was good to meet a man passionate about his facility. I ask for one final photo; perhaps one of him mowing the strip?

The Auto Certes is duly fired up and we head off to the square. John walks away from me and turns to head back towards the camera for that final shot. As he does so, the machine splutters to a halt and, no matter how hard he pulls on the cord, the engine won't start. "Perhaps you have run out of petrol," I suggest. A rather embarrassed John concurs that is, indeed, the problem. "That's never happened to me in nearly thirty years as a groundsman. Trust it to happen when you are here!" 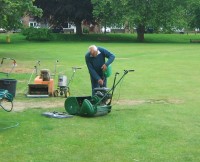