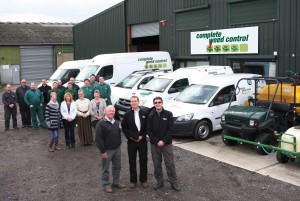 Proud dad John Allen has been steadily expanding his successful Complete Weed Control business over the last 20 years, which has seen him also take on a second territory, enabling his son Richard to help in building a strong family enterprise.

When he gave up his career as a software consultant to spend more time with his family, John initally started the business as a one-man-band with a van, going out armed with just a knapsack sprayer treating weeds on the streets and pavements in the Thames Valley area.

With the help of Richard, who joined the company 14 years ago and has now become Sales and Contracts Manager, the company has gone from strength to strength and can boast cumstomers such as Chelsea Football Club, Ascot Race Course, Windsor Castle and Legoland. The family run business, which has also seen the promotion of Jamie Page as Contracts Manager, has become one of the best performing CWC franchisees.

The company now employees around 20 people, which also includes an extensive office back-up to offer a total turn-key service, working on dozens of contracts ranging from sports facilities, private schools, colleges and universities, royal parks, theme parks and visitor attractions and for local authorities across the Thames Valley and South London regions - not just controlling weeds, but also investing in the company's new services - Complete Ice Control and baseguard - ensuring that it is a truly all-year-round business.

"We've earned a reputation with our customers for providing a good and efficient service using highly skilled operatives," said Richard. "Our customers know that they can rely on us to turn up on site and get on with the job in hand - whether that's treating their weed problems, spraying their surfaces with a feed programme or installing the basegaurd product, which is a low maintenance surface available in a range of colours and is becoming very popular with schools and for access roads to sports pitches."

Demand for their services has been growing strongly. In fact, if anything, the recession has been good for them as Richard explains: "Lots of our customers have discovered that a professional, cost effective and convenient Complete Weed Control service means that they have actually saved money versus doing the work themselves. They save time and money not having to buy equipment that they will only use a few times a year as well as save money on training their staff."

"CWC has come a long way since I first spotted a franchise advertisement in Daltons Weekly," said John, who now oversees Richard, Jamie and the rest of the team. "I was actually looking for a holiday cottage to rent, but also contemplating changing an office based career overseas to spend more time in the UK with the family. Having long been my own boss, a love of gardening plus being keen on the challenges of keeping fit in an outside environment meant CWC certainly ticked a lot of boxes".

"Over the years I've seen a lot of change in legislation including new pesticide and herbicide laws. To keep ahead of our competitors, we have invested in the very latest equipment and training to ensure our staff work to the highest possible standards, which has seen all of Complete Weed Control's franchisees become the only genuine national contractor who has Amenity Assured standard accreditation."

Complete Weed Control is now one of the UK's longest established franchised businesses. Founded 35 years ago, CWC covers 47 regions and has more than 200 operators throughout the UK with a wide range of clients including airfields, sporting venues, camping and caravanning sites, canals and rivers, cemeteries, equestrian centres, industrial sites, highways, parks and National Trust sites as well as local authorities and schools and remain the only company offering a wide range of weed control and gritting services on a national basis.