0 Keeping pace with the ‘Accies’ 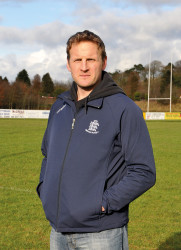 Omagh Academicals RFC's Grounds Manager, Raymond Crosbie, is responsible for the club's Thomas Mellon Playing Fields and oversees the work undertaken by a local contractor to ensure that everything is up to the standards required

It's a rugby club that played its first ever game way back in 1952, but the Omagh 'Accies,' as they are known as, are still going strong today. Short for the Omagh Academicals Rugby Football Club, the Accies have played all around Europe in their history.

Players even ventured further afield when they travelled to Australia, America and Canada to participate in rugby matches with a more international feel to them.

Back home, the club is proud of their twenty-two acre site they hold just outside the County Tyrone town. Around half of that acreage consists of playable pitches and the rest comprises trees or scrub and, of course, the buildings and hardcore areas.

The club grounds at Omagh were bought in 1966 following a very generous donation by the Mellon family from America, hence the name, The Thomas Mellon Playing Fields.

The club has enjoyed huge success over many years and, for one former player of the club, his involvement is still quite strong. 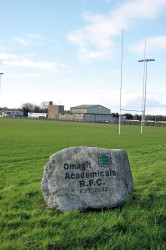 Raymond Crosbie works full time as a dairy farmer and lives quite close to the club's grounds. Not only has he been involved with the club for the past twenty-two years, most of that as a player, Raymond has also looked after the grounds as a volunteer grounds manager for the past ten years. He has called on his experience in farming to help him look after the place - a post he holds after expressing his willingness at one point to help out.

Raymond said: "I used to play for the Accies, but injury forced me to give up my career as a player. I always enjoyed being part of the squad here in Omagh and wanted to continue being a part of the rugby club."

"As a farmer, I enjoy the great outdoors and, when the request was made to come and help look after the pitches, I jumped at the chance."
"I rely on my background gained in farming to guide me in the job, but I also have expert help in the form of a professional grounds maintenance company who take on the more technical and physical aspect of looking after the pitches."

Raymond reports to the rugby club's committee and ensures all expenditure is passed by them before he spends any money.

The grounds consist of loamy soil and are free draining, which comes in handy as the Fairy Water river passes just along the edge of the pitches. On one or two occasions, the pitches have been susceptible to flooding which has hampered working on the grounds but, thanks to the soil profile, the water disappears quite quickly again.

There was a change of tactics at Omagh Rugby Club around four years ago, when the committee decided to improve the overall condition of the pitches and bring in some outside help to get the job done.

Helping Raymond look after the grounds is Dimac Sports Grounds Limited, which is also based in Omagh and run by David Irvine and Martin Corcoran.

Their company specialises in producing and maintaining high quality turf surfaces to many sports clubs around Ulster, including the Accies.
David, with almost twenty years' experience in the sports turf industry, was previously head greenkeeper at Newtownstewart Golf Club. Martin, a qualified quantity surveyor, has over twenty years' experience in the construction industry.

Raymond said: "During my time as a player at our club, the grounds, whilst maintained adequately, did not move on with the increased demands being made on them. For years, all we did was cut the grass and apply some fertiliser and, on occasions, sand was sprinkled to some areas. Over time, we were playing on pitches that could not stand up to the demands and they were deteriorating rapidly."

"We had teams from the youth division, from the minis and from the senior players all using the pitches, but they could not recover after taking such a battering each time a game was played."

"All the machinery we had at the club for working the pitches was very old and was in need of replacing. Bear in mind everyone who was working at the club were volunteers, and were only there when they could spare some free time. The old machinery got the job done, eventually, but they went at a snail's pace, meaning everyone worked longer than they needed."

"Around four years ago, the committee and I decided that we would bring in Dimac to help restore the pitches back to a healthy status and, at the same time, improve the club's overall facilities into a more professional sportsground."

"On the main training areas, we installed drainage schemes on two pitches and some small areas of the other two pitches."

"David talked us through various maintenance schemes for our grounds and we agreed on a programme of sand application, aeration, fertilising, grass cutting and weed control to suit our budget. This programme is very flexible and has been modified at various intervals to address new problems or issues with any particular pitch that we or David bring attention to."

"Since working with Dimac we have found a large improvement in our pitches, their drainage and the quality of the grass sward. As a club we are, therefore, able to get much more use out of our pitches even in times of bad weather."

"We understand more now that we have to put in constant maintenance on the grounds to get the best out of them and to meet the increasing demand on our facility."

David and Martin understand that each client's maintenance budget is different, therefore they work closely with all their clients to understand their needs, and compose a suitable maintenance plan.

And this is exactly what they do at the rugby club, using one of their more commonly used pieces of equipment - a pedestrian aerator. Just two years ago, Dimac bought an Air2G2 and have used it on a large number of golf greens, and they are now beginning to use it on large sports turf areas, especially those which receive a lot of traffic.

Raymond added: "Between Dimac and me, the grounds receive the normal attention with aeration on a regular basis. Two of our pitches have had drainage systems installed in them for the past five years, which has helped enormously with such unpredictable weather in Northern Ireland. But, during the recent deluges, we had two other pitches that were completely submerged twice during the winter."

"All we can do when that happens is remove all the debris strewn over the pitches when the water retreats. All our pitches are fairly open to the elements in this part of the country, so we really are at the mercy of nature."

The demand on the pitches has got even greater. Not only do all the Omagh Accies rugby club teams play there, but the pitches are also hired out to the local American football team who use them mostly during the summer period.

The decision to use the outside contractor was also pre-empted by a lack of modern machinery at the Omagh grounds. Some old machines were available when Raymond took charge, but these were in need of repair and modernising. "In the past, we had an old Massey Ferguson 240 tractor and a ten foot mower, but both machines required some work and were in need of being upgraded. The committee, in the end, decided against spending a lot of money on buying new machinery and, instead, chose to bring in the contractor to carry out the work. It made more financial sense to bring in an outside contractor rather than buy our own machinery."

There is one piece of machinery, however, that Raymond would have on his wish list if it could be granted. "It would be great to have our own aerator so we can use it whenever we liked on top of the visits from Dimac. This would increase the frequency of aeration and also improve the pitches even more. A sprayer would come in handy as well, if we had one stationed at the club."

With such a wide open space at the Accies club there are a few pests running around that can do the pitches some damage. "We have some issues with fox droppings on the pitches," Raymond said. "And also from rabbits. We put down urine to discourage the foxes from coming onto the grounds and the rabbits are also controlled."

When it comes to new projects at Omagh Accademicals Rugby Football Club, there are plans afoot to plant more trees around the grounds and continue to improve the facilities at every opportunity, with the clubhouse the next item on the list for some upgrades. A new gym has also been constructed, which is proving very popular with the members.