0 Keeping polo in a mint condition

Former Greenkeeper, Mark Neale, has his work cut out maintaining over 50 hectares of grass at Beaufort Polo Club with just a staff of three.

Polo is experiencing massive growth at present with a 47% increase in membership in the last five years at clubs across the country. Attendance at polo events has also increased and, with more matches televised in 2007 than ever before, the sport is rapidly becoming more accessible both to play and watch.
The sports governing body, the Hurlingham Polo Association (HPA), has over 3000 members registered and handicapped to participate in the sport. The HPA are responsible for the regulations and rules under which the game is played. This includes the handicapping of anyone playing in the UK or Ireland and the fixtures list. The HPA is currently made up of the following clubs and associations:

A recent trip to the Beaufort Polo Club, regarded as one of the top five club venues in the UK, enabled me to see the sheer size and scale of operations required to run a polo club

Polo is the oldest ball sport in the world dating back to 600 BC. The word is derived from 'pulu', the willow root from which the polo balls were crafted in Tibet over 2000 years ago. The sport gradually spread through Asia to India, where it was introduced to tea planters and British soldiers, who brought the game to England.

The first match was played in the UK in 1869 between the 9th Lancers and 10th Hussars. One of the players in this match was Captain Frank Henry who started the Beaufort Polo Club in 1872.

However, the Beaufort Polo Club in its present form is only fourteen years old and is a revival of a hunt polo club which may have been one of the first, if not the first, of the country's polo clubs. The old club was inaugurated in 1872.

The heyday of the Club was between 1929 and 1939 after it was reformed during the winter of 1928-1929 by a few members of the Beaufort Hunt under the presidency of the Duke of Beaufort. An ideal site was found in the Big Field at Norton, between Malmesbury and Hullavington on the Pinkney Estate.

The present day Beaufort Polo Club is small and friendly, and set alongside the Westonbirt Arboretum in one of the most beautiful parts of England. The serenity and tranquillity of the surrounding Cotswold countryside are in complete contrast to the speed and energy of the sport.

The club now hosts polo of the very highest standard including the Argentine Club Cup, which is the highest ranking tournament event in Europe; and the Evolution Test match which in 2007 saw England take on New Zealand.

From its revival in 1989, by Simon and Claire Tomlinson, the Beaufort Polo Club has had two clear objectives: to provide good quality polo at all levels and to encourage young British players. These aims have fuelled a dramatic growth in the club which now has 145 playing members of which 32% are under 21.
This growth has been accompanied by success at all levels:

Beaufort Pony Club teams win regularly at Cowdray. Beaufort based teams have won the 15 and 12 goal Victor Ludorum trophies more times than any other club. Beaufort based Hildon won the Cowdray Gold Cup in 2004. In 2005 Centaurous Beaufort was the first team since 1966 to qualify for the Argentine Open without an Argentinian in the side.

The club boasts eight polo grounds and several practice and schooling areas. The club also employs over thirty seasonal Argentinian grooms who come over each year to look after some of the 140 horses that are stabled at the club.

Each polo field measures a whopping six hectares (300 x 200 metres playing and safety area). When the eight polo fields and practice areas are totalled together it amounts to a staggering fifty plus hectares of grassland to manage - the equivalent to 83 football pitches!
What is even more amazing is that all these playing fields are maintained by a staff of three - Mark Neale, who is the Head Groundsman, and two assistants,
Wlodek Sterkowicl and John Henry.

Mark has been at the club for three years. Previously he worked as a Greenkeeper at nearby Bowood and Castle Combe golf courses. He has always been interested in the countryside and, in particularly, horses so, when the opportunity came to work at the Beaufort Club, he jumped at it. 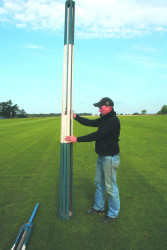 Mark is keen to bring into play some of his greenkeeping skills, particularly when it comes to presentation. As with most natural grass playing surfaces maintenance regimes are geared around good cultural practices, regularly mowing, feeding, aerating and renovations.

Polo is played at the club seven days a week from May to September and the groundstaff often find themselves working twelve hour days just to keep on top of things. The grass cutting alone is a seven day, seven hour a day operation; therefore one member of staff is constantly mowing pitches throughout the growing season.

On most occasions the polo pitch is prepared for play on the day of the match, usually completing the work two hours before the commencement of a game. Each polo pitch will be mown, marked and set out. Pitches are marked out using a spray jet ride on marker with water-based paints

Grass height on the polo fields is kept between 22-30mm with a Ransomes five gang hydraulic cylinder mower. Grass adjacent to the boards which extend along the touchline is cut using strimmers.This operation alone takes forty minutes to cut one polo field surround.

As with all equine related sports the safety of the horse is paramount, so the condition of the sward and, more importantly, the state of the ground is critical when playing. Mark tries to maintain a ground that is good to firm.

The underlying soil structure is predominantly a sandy loam soil on top of a chalk limestone sub soil structure, which makes it fairly free draining. Therefore, it is essential that Mark has a decent watering system to help keep the grounds in the condition he desires.

With such large areas of ground to irrigate Mark has recently upgraded the watering facilities, buying another Briggs irrigator to add to the one they already have, together with the purchase of a new water pump to extract water from their newly enlarged water reservoir.

The new pump can supply 70 cubic metres of water per hour, with the two Briggs irrigators on the go, they can efficiently water a single polo pitch within a day applying some 300 cubic metres. Mark ensures that the last watering application is at least two days before any polo match, allowing the soil to get to its

A programme of aeration is carried out several times throughout the year using a combination of hollow core tines and slitting blades however, in most cases, these operations can only be done when ground conditions are favourable.

Over 2500 tonnes of topdressing is applied each year, usually in three applications (May, June and July). The pitches are also harrowed after matches to restore levels.

Each polo field has to cope with over fifty games per season. Each game is played over four, five or six periods of seven minutes called chukkas. but generally a game will last for four chukkas making a total of twenty-eight minutes a game.

There are four players in each team who often use two horses per game. You can well imagine the damage caused by these horses, especially when ground conditions are wet. The main divot damage centres on the goal areas and the central areas of the field where the game is started after each goal scored. A tradition of the game is to 'invite' spectators to repair divots at half time and full time.

Mark rotates the use of the pitches to ensure wear is kept to a minimum, and he keeps a keen eye on ensuring that the premier pitches remain fit for play and look their best for the premier fixtures that will attract well over 5,000 spectators to each game.

End of season renovations consist of cleaning up the surface using brushes and overseeding using a direct drill seeder sowing a Polo seed mix of grasses that include:


An application of a granular autumn fertiliser is applied (Headland 25.5.15) to help condition the sward through the winter months.
Nitrogen is applied during the season at the rate of 75kg/acres when required.

Broad leaved weeds and clover need to be eradicated as they create a slippery surface which is dangerous for the horses.

Moles and rabbits are the main pest concerns as their burrowing activities can cause huge problems to the horses foothold. Regular controls are in place to deter these pests, usually in the form of traps and shooting.

During the winter months grass height is raised to around 30mm and cut as and when required. Mark and his staff spend the remainder of the winter months carrying out a number of other tasks at the club, such as hedge laying, repairing boards and goal posts and maintaining the outdoor artificial practise areas.