0 Keeping the peninsula sharp... A Gingerbread man on the Wirral

When Carl Crocher joined Caldy Golf Club as Course Manager in 2003, he brought over twenty years experience to the club, having previously worked on new builds in Germany, the construction of a new course in Yorkshire and the restoration of a heathland course in Essex.

Laurence Gale MSc caught up with him recently on this Links and Heathland course to find out about this Gingerbread Man's maintenance regimes.

Caldy Golf Club is located on a 48 hectare site, overlooking the Dee Estuary, part of the Wirral peninsula. With fine natural turf and undulating terrain the original nine holes were laid out in 1907, following advice from the Royal Liverpool Golf Club (Hoylake) professional, John (Jack) Morris, a descendant of Old Tom!

This was part of the Caldy Manor Estate, with the entire course nestling atop the cliffs, west of the old railway line, now known as the Wirral Way.
In 1930 the course was expanded to 18 holes to a James Braid layout. In the intervening years modifications, improvements and extensions have produced the present course, a demanding layout of 6,707 yards, par 72 for men and 5,798 yards, par 74 for ladies that now straddles the Wirral Way.

Set mainly upon heavy topsoil with distinct sand layers at varying depths and patches of sandier soil, particularly on the coastal side of the Wirral Way, Caldy provides the golfer with a course renowned for its excellent playing surfaces. Undulating fairways, established woodlands and links/heathland characteristics, all contribute to a golf course of outstanding quality. Eight holes (3-10) are laid in a cliff top links setting and provide an interesting comparison to the remaining heathland holes on the course.

Since then, the course has undergone considerable investment to build new tees and greens along with the placement of new bunker traps. The whole course was redrained in 2000 in order to maximise playing conditions, whatever the weather.

Caldy has been the venue for many important events. It has been a qualifying course for the European Open and has co-hosted the Seniors Open Championship with The Royal Liverpool Golf Club. In 2007 Caldy was the chosen course for The Seniors Home Internationals Championship.
Ladies golf has always been part of the scene at Caldy. The Caldy Classic played a significant role in the development of the LPGA European Tour with winners Dale Reid and Laura Davies going on to enjoy future successes.

One of Carl's first jobs when he arrived at Caldy was to review the condition of the course and its resources. What he found was a club that spent a fortune on chemical applications but only replaced its machinery when the current machine had conked out!

A fan of sustainable golf, and one of the happy band of greenkeepers that collectively call themselves the Gingerbread Men, Carl explained to the committee how such an important site ecologically - it is classified as part SSSI - should be ecologically proactive. He outlined the methods to be used and showed how, by keeping the machinery up-to-date and in good order, he could achieve sound ecological improvements that would benefit everyone at the club and, importantly, the environment.

The committee were suitably impressed and agreed to commit to £300,000 over a five year period to ensure a healthy annual budget was set aside to continually update equipment. The club now invest some £40,000 each year to keep their equipment in the best possible condition.

These new working practices are now firmly incorporated into the club's policy document.

The club now employ a dedicated mechanic and have their own grinding machine. Mowers are sharpened at least three times per year. Downtime on repairs and servicing has been reduced dramatically enabling the staff to be more efficient in their mechanisation of the course.

In addition Carl has been working closely with Bob Taylor and Lee Penrose from the STRI who have helped introduce and increase wildlife habitats around the course. Many of the links/heathland aspects are still under threat from unchecked scrub growth, including poplar, leylandii, cherry, horse chestnut, willow, bramble and sycamore. Carl and his staff have cleared and replanted many areas in the last three years.

Carl has also installed a recycling washdown facility that collects water from the roof of the machinery sheds, stores it in a 6000 litre storage tank.
Once the mowers have been washed down, the waste water is then filtered (grass clippings and any debris are collected and composted) leaving the remaining waste water to run into a horizontal reed bed filtration system. The water then collects in a pond for further settlement and is then stored in an underground 2800 litre tank for pumping back into the main water storage tank for the whole process to start again. 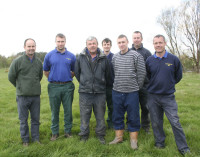 Carl and his staff installed the whole system themselves and have been very pleased with the results.

This winter Carl has rebuilt two tees (8th and 15th) and three greens (7th, 8th and 14th). All the work was carried out in-house with the exception of the shaping. The turf from the old greens was stripped and stored, a new gravel drainage layer constructed, overlaid with a 300mm sand/compost rootzone, and returfed.

On the tees the objectives were to improve the quality and size of the tees whilst, at the same time, improving foot traffic from green to tees.
Other work over this winter was the refurbishment of a number of bunkers. Due to the current variation in bunker construction at Caldy, Carl is trying to revert back to a definitive style, in keeping with Braid's original bunker designs. They are built with rolled over turfed faces with natural contouring and movement on three planes i.e. top mounding, bunker face and sand interface. Bunker contouring is designed to enhance the gathering area, whilst enabling a smaller sand area to be used. Depth of sand in the bunkers is around 150mm.

All aspects of maintenance are aimed at increasing the amount of Agrostis/Festuca in the sward. Cutting heights vary from 5-7mm and are cut using John Deere 220Bs and a John Deere 2500A. Heights may be reduced, for short periods, to 4.5mm, but only when the grass is growing vigorously and for no more than three to four days at a time.

Scarification is carried out in the spring and autumn and supplemented with an active programme of brushing, verticutting and turf grooming.
Aeration is a key operation at Caldy with Carl using an array of mechanical aerators to keep his playing surfaces open. These include the use of hollow tines; solid tines, slit tines and deep heave vertidrain machines. During the summer months, the greens will be aerated to depth, dependent on need and prevailing weather conditions, on a three to four week basis. They will also be either star slit or sarrel rolled on a weekly/fortnightly basis. Built around these scheduled operations will be the intervals for topdressing using between 120 and 170 tonnes of dressing, depending on the season.

Carl operates a minimal fertilising regime, having reduced the input of N from 160 kg N /Ha to 40 kg N/ HA. Powdered fertilisers (8:0:6) are used in spring and occasional turf hardener applications are used early spring and autumn. The USGA greens will probably receive a second spring and summer application. Otherwise liquid seaweeds and turf tonics are used on a regular basis throughout the rest of the season, and Primo Maxx has been part of the programme for the last two seasons as it fits with what Caldy are trying to achieve.

Careful use of irrigation water is a prerequisite, with hand watering of fine turf areas preferred. Automatic irrigation is only used as a tool to wash a product into the sward and only as a last resort for irrigation purposes. A mixture of granular and liquid wetters is used, being preventative rather than curatively.
Carl operates an Integrated Pest Management regime, with pesticide usage being the last resort. Hand weeding is preferred. Carl accepts some level of leatherjacket damage and, so far, preventative insecticide applications have not been required. They do have a small amounts of disease and are still applying fungicide every autumn, with the aim of this not being required in the medium term. However, as Carl says, you can never say never.
Overseeding of the greens takes place in early spring and also in August/September, with Fescue being used both early and late, while Bentgrass is used in August.

The current tee rebuilding programme is addressing the size and orientation issues on each hole, and is due to finish in 2013. Trees that affect light penetration and airflow across the tees are regularly pruned, crown lifted or, in some cases, removed for the benefit of maintaining sward quality.
The tees are cut using a John Deere 500 or 3235 ranging between 10-15mm on the playing surface and 38-50mm on the surrounds and banks. The latter ensures greater wear tolerance, definition and orientation.

The height of cut will vary from 10-15mm depending on environmental conditions. A John Deere 3235 is used. Divoting with a compatible sand/soil/seed mix is carried out on a regular basis especially in areas of intense play.

Tonic and organic amendments are used to stimulate soil microbial activity rather than use high nitrogen compounds. Fairways will, in general, be wider; up to 200 metres from the tee and, from then on, narrow and taper into the green approach, measuring from 20-30 metres in width. The approaches are maintained between 10-13mm using the JD500, 3235 or the Toro 3250.

Caldy has six members of staff; Ian Farrall, Head Greenkeeper, Paul Gater, First Assistant, Paul Wilkinson, Tim Coombs, Ross Abercrombie and Ryan Sterling - Assistant Greenkeepers. The latter two are the newest recruits and are currently being assessed for their suitability for the vacant mechanics position, the previous one has just left to become Mechanic/Deputy at Royal Malta Golf Club.

The Club have been massively supportive of the work being carried out at Caldy and their financial backing has been vital. The feedback has been predominantly positive, with support definitely growing for the bunker and tee rebuilding programme.

Maintenance work is now scheduled into the club's fixture list each season, with small gaps created to accommodate these essential tasks. This method has positively reduced the antagonism of producing surfaces against essential tasks.

Carl says that so long as they continue to raise the bar and strive to produce a course the members are proud to bring their guests to, the greenkeeping is left to the professionals. Communicating their plans for each month through as many channels as possible is equally as important as timing their aeration practices. Accordingly, they have just started upgrading the website to increase the channels of communication.