The villages of Knowle and Dorridge sit just outside the M42 corridor, close to Solihull in the West Midlands. The two villages, just a stone's throw apart are, to all intents and purposes, one community of around 5,000, with the Knowle & Dorridge moniker attributed to the Lions Club, the lawn tennis and squash club, the dental practice and, of course, the cricket club.

Ian Maddocks is the Head Groundsman and has a long association with the club. Not only has he dedicated himself to looking after the grounds; he was formerly the clubs 1st XI captain and has been a long serving player. He first came to Knowle & Dorridge as a seven year old, supporting his dad when he played for the club.

The club has been in existence since 1896, and is one of the oldest in the area. Their clubhouse is a constant hive of activity and is supported by many locals who come to enjoy the social activities on offer, whilst also taking in some decent cricket.

Knowle & Dorridge currently play in the Birmingham Premier League, with fixtures against towns with much larger catchment areas, such as Shrewsbury, Wolverhampton, Kidderminster and Moseley. The ground also hosts county fixtures, as was the case when I visited.

The club is in constant use seven days a week, with the ground providing pitches and practice facilities for all the club's teams - four senior sides and several youth sides from under 9s to under 17s. There are two grounds. The main home ground has a square that provides thirteen tracks, whilst their training/second ground provides twelve.

They have always invested time and money ensuring the grounds are well looked after, having always paid someone to undertake the maintenance.

The club gained Club Mark status recently, and are continually trying to improve their facilities on all fronts. In 2007, they secured a large grant to improve the outfield and install a perimeter drain around the square.

The work was awarded to Agripower Sportsturf Contractors, who fraise mowed the whole outfield, cut and filled some uneven areas, installed some primary and secondary drainage, as well as installing a brand new perimeter drain around the square. The whole outfield was then reseeded. It has made a great difference to the outfield, ensuring it drains well after rain. Ian usually gets the outfield aerated in February, hiring in a vertidrain to maintain good porosity.

Ian officially took on the job of club groundsman in 2002 after their previous groundsman, David Winslow, sadly passed away. Having spent most of his life at the club, Ian relished the challenge and the opportunity for him to develop his groundsmanship skills.

It was Steve Rouse, the Warwickshire County Cricket Club groundsman at Edgbaston, who encouraged Ian to take up the post. Steve and Ian have been friends for years; Steve, a club member, would often call in for a drink and chat and mentor him on the rudiments of cricket pitch preparation and maintenance.

As far as Ian can remember the square has always been on Kaloam, a popular loam used by many Midlands Clubs. The subject of Kaloam supplies has been high on the agenda for many of the local groundsmen since the supplier, Monro Sports, went into receivership late last year. The latest on the subject is that supplies are available via two outlets, with both companies guaranteeing the consistency of the new loam product, and both giving out samples for clubs to try.

Ian is planning to carry out motty tests to see how it performs before committing the club's hard earned cash. However, with the alternative of changing loam being, pretty much, out of the question, I imagine, like most clubs in the Midlands, they will have to trust the companies and go with what they are supplying.

Ian was keen to explain that his many years of experience have helped him gain better understanding of the cricket square, having spent the best part of forty years either playing on or maintaining the pitches.

As is the case for most groundsmen, no two years are ever the same and, this year, the dry weather has provided another learning curve - keeping pitches watered has taken up a lot of time. On the other hand, not having to use any flat sheets has saved Ian a lot of time.

Ian does not like the phrase, 'end of season renovations!', preferring to call them 'pre-season preparations'. As he says, the key to having good pitches is determined by the success of the work done in the autumn.

It is vitally important to remove as much debris as possible, and using the Graden Scarifier is key to his success. As the cricket season comes to a close, Ian begins his renovations by reducing the height of cut (4mm and below), shaving off as much vegetation as possible. The square is soaked to get moisture into the top 50mm. This helps ensure he can get maximum depth with the Graden.

The square is then scarified in three/four directions to a depth of 5mm to remove as much rubbish as possible, the debris is collected using a combination of brushes, blowers and mowers, thereby leaving the top clean and ready to be seeded.

Ian uses his Sisis Variseeder to sow his chosen seed - the last couple of years he has used R9, sowing in four directions (two bags). The square is then topdressed with Kaloam (eight bags per track) to restore levels and cover the seed. An application of 6:9:6 NPK granular fertiliser is used to promote growth once the seed has germinated.

The new grass is then mown using rotary pedestrian mowers, maintaining a height of 20-25mm throughout the winter. Some liquid iron is also applied to maintain colour.

Autumn is a busy time for Ian because he also renovates a number of other cricket grounds in the area. Over the years he has picked up more and more work, building up a reputation for doing a good job, which has enabled him to invest in additional equipment to help him carry out the renovations (sorry, pre-season preparations) more efficiently. Buying a Graden, for example, has made life a lot easier, as has the purchase of a Dennis FT 510 cassette mower.

Ian's pre-season rolling programme is similar to most clubs, starting off with the pedestrian mowers and gradually building up the weight until he can get on with the main roller.

Ian has a helper, Aadam Kin, a young, promising cricketer who, although he plays cricket for Moseley, is glad to work with Ian to gain experience.

Ian starts work every morning around 7.00am, and works until he considers the job is done for that day.

His work is heavily planned around the fixture list. No games will be catered for unless it has been put on the calendar and Ian has been notified.

Senior matches tend to be played on Saturdays/Sundays, with maybe one or two in the week, whereas the juniors have allotted evening games and training slots mid-week.

Wickets are prepared ten to fourteen days in advance. Over that period the height of cut will be reduced from 12mm to 4mm. The wicket will be brushed, cut and rolled to produce a track that can last for three to five matches.

Depending on the weather, the use of water and covers is down to Ian. Over the years, he has earned respect from the players and has managed to set some ground rules, gaining help from the players to help move the covers before and after matches.

With so much to do at both grounds, Ian is always keen to get ahead of himself, getting wickets prepared early for matches and, therefore, not leaving himself too much to do on match days. So, for a typical Saturday fixture starting at 12 noon, depending on the weather, he will have virtually all the work completed by Friday afternoon.

The fruits of Ian's labour are now being rewarded, with Warwickshire CCC happy to use the excellent on and off field facilities at the club.

Not wishing to miss an opportunity to see how Ian's tracks would stand up to a forty over game, between a Warwickshire Select XI and a strong Yorkshire side, I arrived at 11.30am, half an hour before the match was due to start. Ian and Aadam were putting the final touches to the square and taking down the practice nets.

Just before the start of the match, two notable cricket groundsmen turned up to watch; Karl Brotherhood from Solihull School and Graeme Plaistow from Olton & West Warwick CC, who had come along to help out, if required.

The track used was one that the club's first XI had used the previous Saturday. It looked in good condition, with just some minor foothole repairs indicating its previous use. Warwickshire won the toss and put Yorkshire in to bat first. I was privileged to be allowed on the balcony, sitting alongside Dougie Brown, the former England and Scotland international and now on the coaching staff at his beloved Warwickshire, where he played much of his first class cricket.

With the track showing plenty of carry and pace, it was rather surprising that, on a wicket that usually produces over 200 runs, Yorkshire were bowled out for just 168.

During the interval, Aadam and Ian cleaned up the creases and gave the track a light roll with the hand roller. A few spots of rain arrived during the interval so, as a precaution, we fetched the raised covers and placed them over the wicket, However, as soon as we got them in place, the rain stopped and we returned them to their storage area.

Whilst I was out on the square, one of the Yorkshire coaches came up to me and asked how I was. I didn't recognise him straight away, but eventually realised it was Kevin Sharp, who I had worked with at Telford & Wrekin Council, when he was their Cricket Development Officer.

As an ex-Yorkshire player himself, Kevin had moved back to Yorkshire several years ago to take up a role as batting coach. He was keen to point out that the track was perfectly okay, it was really a poor Yorkshire batting display. 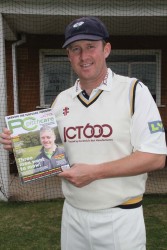 With Warwickshire chasing a relatively low score, they must have been confident of a win. However, their batting seemed to be even worse than Yorkshire's and, after a flurry of wickets fell, were all out for 105. Not a good day for the home side.

As always, Ian was keen to gauge the reaction from the umpires about the condition of his wicket. They too put it down to some poor batting, stating that track had performed perfectly well.

With the game finishing early, Ian and Adam spent some time cleaning up the wicket and mowing it with the Dennis FT510, before having a well earned pint in the bar.

With little damage to the wicket, Ian will even have the bonus of getting another game out of it before finally putting it to bed.

It was great to catch up with Ian who, like so many cricket groundsmen, spend most of their waking time in the summer months devoted to their clubs, continuing to strive to produce the best surfaces they can.

Ian is proud of what he has achieved over the years at Knowle & Dorridge and enjoys the way of life he now has, serving the club he loves. He is a true credit to our industry and, like the vast majority of cricket groundsmen, an invaluable asset to the game.