2 Keeping within the Boundary 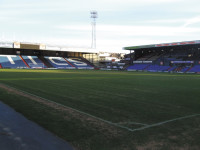 Taking position as the 3rd highest football league ground in England at 509 feet above sea level (only behind West Bromwich Albion's The Hawthorns at 551 and Port Vale's Vale Park at 525) is Oldham Athletic's Boundary Park. Situated to the north of the town, the ground is a 13,500 all seat venue which plays host to 23 Coca Cola Division 1 games per season plus Carling Cup, FA Cup, Reserve and Youth team cup fixtures and most home games of Oldham RLFC from January to September.

Taking charge of the stadium pitch, training pitch and the club's training ground at nearby Chapel Road is 38 year old Tony Owen, whose previous experience has led him from his North Wales roots, via Myerscough College to Crystal Palace (as Head Groundsman), Arsenal (as Senior Groundsman at the London Colney training ground) and a short spell as groundsman at Bolton Wanderers before arriving at 'The Latics' in 2005.

The pitch at Boundary Park is a Desso type, built over a gravel base with excellent drainage characteristics. Constructed six years ago, it holds up well as a dual use pitch for both football and rugby league. The key to using and maintaining this type of pitch is to water them well claims Tony. "It is a bit like a beach - lower down where the water comes in, sand is more solid and won't shift if you kick it, but further up the beach the dry material is easily moved.

The same holds true for a Desso pitch." This watering tends to make the pitch less prone to being cut up but it does depend on the weather. Tony finds that the more watering, the better the structure. Another key to his maintenance schedule is solid tine coring, which is done when possible. A prime example of this opportune maintenance was on New Year's Eve. "I was not due to be working but we had a match on the 1st January and the weather did not look good. I came in and multicored the pitch using our MC10 solid tine machine, which turned out to be the right choice as not only did other professional clubs in the area call games off, but we won five nil against Nottingham Forest!".

Tony explains that although the pitch was not, and is not, looking the best it has ever been the most important aspect he feels is that it is playable during the winter months. Tony relies on his experience and a keen eye on the weather forecast to keep the pitch in the best condition possible. By having set methods to counteract scenarios he is able to achieve a playable pitch, something others are not. With snow forecast he will often leave the pitch uncovered as frost covers are harder to clear, but this will depend on the temperature predicted.

The biggest problem encountered with the Boundary Park pitch is Poa annua, an annual meadowgrass that grows rapidly in the top inch or two as organic matter builds up. This grass takes over the ryegrass basis of the pitch and weakens the surface, meaning that the winter months can lead to the pitch deteriorating. "It is a constant battle" says Tony, "with the top of the pitch resembling a plasticine consistency in some areas.

" To counteract this problem the pitch is regularly multicored (as mentioned previously) but, on a three-year cycle, the pitch is set upon with a Koro Field Top Maker which removes this layer, leaving fresh soil (minus the Poannua) to be re-seeded. One drawback of using the Koro is that some of the Desso fibres will be removed and others damaged. "This renovation, although brutal, is necessary" says Tony. "We were worried about the effect it would have on the Desso but it appears to work wonders.

I had full support of the club's Chief Executive, Alan Hardy, when budgeting for doing this, and we tie in the maintenance into the two months after the football season finishes - from around the 21st May to 21st July. We need to have that two month window to allow renovation and to allow re-seeding to take hold before the football season" Tony adds. "It costs us five to six thousand pounds to do it, but it is worth it. It is pencilled in to be carried out in May this year." This results in Oldham RLFC having to find another pitch for this period.

So, what is Oldham's usual maintenance routine on a daily basis? With only three staff for Boundary Park and its training pitch at Chapel Road, time is always of the essence. A hectic schedule of training, matches and maintenance is in place for Tony and his assistants, Warren Caine and Jamie Wright (although Jamie is leaving soon to take over as Head Groundsman at Blackpool FC). 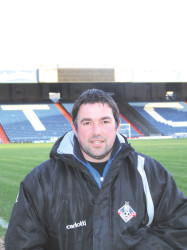 A close knit team at Oldham means that when a job needs doing it gets done. "A sense of 'Team Oldham' exists within the club" says Tony, "meaning that help is always at hand when required." His general schedule post match involves divoting and then a light mow with the club's Ransomes Mastiffs or Dennis G860's, giving a light roll in the process - enough to level the surface back down. Winter often calls for frost protection and, given the height of the ground, it is generally required during November to February. Frost sheets are used, and pegged as required. If rain is forecast, the ground is often left free as moisture helps to keep the structure of the Desso intact.

So, what challenges face groundsmen in future years? Maintaining a pitch in the shadow of the main stand is something Tony has to deal with, and in the short winter days, lack of sunlight can be the enemy - Boundary Park does not have it in abundance. Grass growth is limited in the winter, a severe limit on exposure on a third of the pitch does lead to problems, with the ryegrass not taking hold and Poa annua becoming more of an issue.

"Each stadium has its own microclimate - they all have different elevations and face different directions, so light is always an issue. I think development of new ryegrass varieties with less light dependency but with enhanced durability may well be the next new idea in this industry, unless the price of light rigs is more affordable" Tony explains. "Progressive clubs like Arsenal and Steve Braddock (their Head Groundsman) have looked at the issues and purchased rigs to counteract their problem at the Emirates Stadium, but we cannot afford this scenario at present. When they become more affordable then we will be able to resolve our light issue more easily."

Another aspect that raised its head recently was the advent of 3G (third generation) synthetic pitches. Oldham were the forerunners in the 1980s with a 'plastic pitch' along with Preston, Luton and QPR. These proved unpopular and were deemed dangerous by players and managers, but Tony identifies the new pitches as progression:

"Ten year old kids who are playing on them now will be used to the surface and how it plays so, when they become professionals in ten years time, they will be more adaptable. At present, these pitches are suitable for training as they are playable in virtually all weathers." He does identify, however, that they would be more suited to Division 1 or 2 clubs, although cost is still a massive issue.

Upon stepping into the shadow of the main stand at Oldham, one feels that there is a club bursting to explode back to the heady heights of their Premiership days some ten years ago. However, with competition for fans extending to the greater Manchester area to the west and north to Bolton and Blackburn, filling this stadium is not easy. Achieving good football means providing a good pitch, and Tony Owen manages this with a small team working on a limited budget.

As this is written, the club sit in the top six of Division 1, in hope of reaching the Championship and the revenue that it can bring. Plans are afoot to rebuild three of the four stands, including the light restricting main stand, with scope for offices, hotel and new housing built into these proposals. If these come to fruition Oldham's pitch is likely to be maintained to an even higher level than the one Tony currently provides.

Counteracting his Poa annua problem by a regular maintenance schedule allows him to keep on top of it, and removing organic matter keeps the life of the Desso pitch to its maximum. He proves that, even on a limited budget with limited staff, a groundsman can keep a pitch to a very good standard even during the winter months.