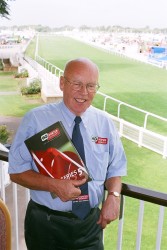 Keith Cann-Evans - a pragmatic optimist with a James Bond complex and five grandchildren!

Who are you? Keith Cann-Evans, Former Chairman of Hunter Grinders.

Status? Married to Janet. A son and two grandchildren in Australia. A daughter and three grandkids in New Zealand.

Who is your hero and why? J.P.R. Williams, Welsh Rugby fullback in the 70s. Still found time to win Junior Wimbledon and study to be a surgeon.

What is your dream holiday? Any one of a number of places on the Pacific coast of Australia.

What annoys you the most? Politicians and anyone who plays at Politics.

What would you change about yourself? A few things, but it's a little late in the day!

Who wouldn't you like to be? Anyone in the full glare of publicity.

Favourite record, and why? Tina Turner 'Simply The Best'. It reminds me of all the good things in life.

Who would you choose to spend a romantic evening with? Julia Roberts, Janet agreeing of course.

If you won the lottery, what is the first thing you would do? Fly 1st class to see the kids and grandchildren and buy an Aston Martin.

If you were to describe yourself as a musical instrument, what would it be? A clarinet.

What is the best advice you have ever been given? Be honest, and particularly to yourself.

What is your favourite smell? Roses. The one on my front porch and I don't know its name.

What three words would you use to describe yourself? Pragmatic, optimistic, relaxed.

What talent would you like to have? To speak more languages than Harry Jurgens or play any musical instrument well.

What makes you angry? Political correctness.

What law/ legislation would you like to see introduced? Remove the UK from the EU.