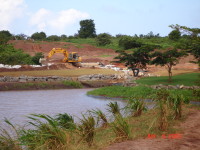 "There is no specialised golf construction machinery available in Kenya, so all the major pieces of equipment were sourced from abroad and imported"

The two golf courses under construction at Vipingo Ridge are the first in East Africa to be built to a truly international standard, with USGA specification being used for all aspects of the course.

The large and undulating greens are cultivated with fine Bermuda grasses to guarantee fast and true putting surfaces. A fully automated irrigation system and a large inventory of new greenkeeping equipment ensure that the playing surfaces are maintained in pristine condition all year round.

A meandering system of waterfalls, lakes and streams runs through both courses, giving a real risk-reward quality to many holes, and also creating new natural habitats for birds and wildlife. Extensive fairway modelling and the planting of thousands of new trees ensure that every hole has strategic elements to bring interest and enjoyment.

We talked to the architect, David Jones, Master Pro of the PGA and a European Tour Director.

David has a long association with Kenya, dating back to 1970, when he first visited to play in the Kenya Open golf tournament, which he won in 1989. He has designed many golf courses, not only in his home country of Ireland, but also in Finland and Turkey, where his PGA Sultan course has just been awarded the honour of hosting the Eisenhower Trophy (World amateur championship), in 2012. Vipingo Ridge is his biggest design venture to date.

Is there a golfing history in Kenya - When was the first Golf Course constructed and how many are there now?

Golf has a long history in Kenya and is a very popular sport. It started in the colonial era when the British just about peppered anywhere they colonised with golf courses. Kenya fell into this bracket, and so has about forty courses, most of which were built between 1900 and 1970. There have only been three built in the 'modern' era; Windsor GC in Nairobi, Leisure Lodge GC on the South Coast, and Great Rift Valley CC near Naivasha.

Some of the older ones are quite famous, Karenm, Muthaiga, Royal Nairobi, Sigona and others are all delightful and colourful, if a little old fashioned.

The Kenya Open is one of the oldest major golf tournament in Africa having been successfully run since 1967. Many of the World's top players have competed in Kenya and the winner's list is a veritable who's who of pro golf over the years.

What were the reasons for choosing this site for the Golf Course?

It's a fantastic site scenically, with amazing uninterrupted views of the Indian Ocean and the African interior. It is in a popular international holiday and safari destination, and is a large residential area too, with an ethnically mixed local community. There is also a strong local market for other Kenya residents to own a coastal home.

The main reason was to provide Kenya with a world class golf and property ownership opportunity, the sort of thing which is found in South Africa, Dubai and Southern Europe but, until now, not in East Africa. It will also be one of the only places where golfers can enjoy affordable caddy-based golf, instead of the more common resort golf cart experience.

Is it close to towns, cities and businesses?

It's about 40km from Mombasa, East Africa's main port, and with an international airport with good connections to many European cities.

Are you looking to attract businessmen?

Yes, there is a vibrant Kenyan middle class and business community. They have been amongst the property investors, and constitute a large proportion of the keen golfers and golf members in Kenya.

What is the projected membership - is it dependant on property sales or will there be an option to play the course on a fee basis to locals?

There are two courses. The one presently being completed is The Baobab. You have to be a property owner to be a member, but it is open for play to everyone on a green fee paying basis. The second course will be The Palm, and the membership conditions there will be different with memberships available to non property owners.

Is the course built to PGA/Tournament standard?

Yes, the greens and tees are full USGA spec and the course, generally, is built to the highest specifications available. It is over 7200 yards from the championship tees, but with five or sometimes six different sets of tees, it is playable by anyone.

Was specialist machinery brought in to aid with construction?

Yes, in fact there is no specialised golf construction machinery available in Kenya, so all the major pieces of equipment were sourced from abroad and imported. Bulldozer, tipper lorries, Bobcats, road rollers, greenkeeping machinery etc.

Dan Kain, a professional golf course shaper from Point Blank, Texas was engaged to construct all the features in the design. Michael Meinhold, a professional greenkeeper from Germany, was appointed as Head Greenkeeper to produce the huge turf nursery required for all cultivation, and to keep and maintain the course, as they were built.

Was local labour used - what is the process?

Again, yes, Vipingo Ridge is a large employer of local people, with about 350 men and women engaged as machine operators (some very skilled), to grass planters. The project, when complete, will open a further range of work opportunities. Greenkeeping, horticulture, waiters, security staff caddies and domestic services. We expect a total community workforce of around 1200, and this is in an area where opportunity was previous very limited.

Were there any problems with Planning Consent (Authorities)?

No, the estate was formerly a sisal farm, which is a crop in declining demand. The authorities were happy to allow for change of use, and NEMA (the environmental body) were very happy with our proposal for water recycling and preservation and our conservation policy. 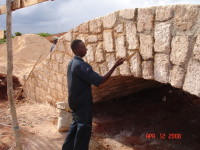 Was the layout and size of the Course determined by any particular existing features?

Not really. The estate is over 1000 hectares and the golf course designer was consulted on the best area to locate the golf project. Since most of it was just poor quality neglected sisal and low immature bush, he had a pretty free hand. It is hard to believe such a beautiful and dramatic course has emerged from the original landscape.

Did any of the following create problems?

There were hardly any mature trees on site, and those that were have been preserved and brought into the design.

Levelling - how much earth needed moving?

An extensive earthworks programme was implemented to create very dramatic areas around the clubhouse and the final holes of each nine. A total of about 450,000 cubic metres was moved.

Drainage - what system has been installed for drainage and irrigation?

The entire estate area is intensively drained, and the system was designed and installed by Dom Weeks, the Civil project manager. All rainwater is collected and reused.

The golf course is totally drained with a widespread system of catch basins and underground drainage. There is a fully automatic Toro irrigation system, designed and installed by our golf project managers.

Climate - how does the weather affect the maintenance programme?

Not that much. The climate is tropical but not extreme. The course is entirely planted with Bermuda turf grasses which thrive on sun and water. Since we have full availability of both all year round, the courses should always be in excellent condition.

Are there any insects, soil parasites or diseases indigenous to Kenya?

Quite a few, but nothing out of the ordinary that cannot be controlled with environmentally acceptable commercial products.

Are there any training or practice facilities planned?

Yes, there is a huge practice range 100m x 300m, with a full array of facilities. There are two practice putting greens. There will be a fully qualified Kenyan teaching professional, and there will be training programmes for local youngsters to introduce them to the game.

Are the plans for the second Course going ahead?

The design for the second course has already been planned. It will be very different in look and theme, but will be equally enjoyable and exciting - lots of water, lots of natural features … the rest is a secret for now. Watch this space!