0 Kevin O'Neill is Toro Student Greenkeeper of the year 2014

Kevin O'Neill has been named Toro Student Greenkeeper of the Year 2014 just days before he heads to Gleneagles to join other greenkeeping volunteers at the Ryder Cup. 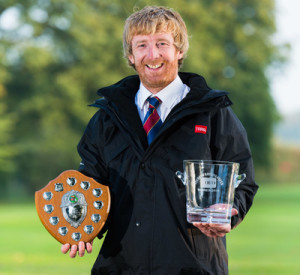 Kevin will head to America next year for a six-week study course at the University of Massachusetts and will also visit the Golf Industry Show in San Antonio all courtesy of Toro. He will also get the chance to explore Toro's Californian base. This year's final had a celebratory air as a special event was held to mark 25 years of the competition.

The Rochdale-born greenkeeper, who attends Oaklands College, said: "I'm very proud, I put a lot of work into this! The final was an amazing experience. I don't think there was much between the six of us.

"When you look at the names of the previous winners and the careers they've gone on to have it's brought home to me how important this competition is, it's the highlight of my career so far. I can't wait to head to America and before that I'm very excited to be heading to Gleneagles."

Kevin began his greenkeeping career at Gleneagles before spells as a groundsman at Charlton Athletic and Barnet football clubs. He joined Muswell Hill in 2008, and this week will head back to Scotland as he joins the rest of the greenkeeper volunteers for the Ryder Cup.

Matt Plested, Course Manager at Muswell Hill, said: "Kevin's the best greenkeeper I've ever worked with, he's so dedicated and professional. I'm so pleased that he will now get the opportunity to study in America because he deserves it. When he called me to tell me he'd won I felt like a proud parent on X Factor!"

Tom and Wesley will attend Continue to Learn at BTME 2015 courtesy of Toro, all finalists will be given free BIGGA membership for a year and they have also all been awarded a place on the Turf Managers' Conference at BTME 2015.

The procedure for the final was refreshed this year to include a discussion panel, a multiple choice test, an essay question and a presentation by the candidates prior to interview.

The discussion panel was chaired by Les Howkins MG, Course Manager at The Richmond Golf Club and BIGGA Vice Chairman. The finalists were asked their views on hot topics in the industry including the public perception of greenkeeping, data collection, heights of cut, the use of organic products in turf management and education.

Day two of the final began bright and early with the six sitting a multiple choice test on various aspects of greenkeeping, then answering an essay question.

Chris said: "I loved judging this year's competition, it was terrific to see the finalists' knowledge and passion for greenkeeping and all six can be extremely proud to have reached this stage. They got on so well as a group and I look forward to seeing how their careers progress."

Before the final itself, a special event was held at Aldwark Manor Hotel, adjacent to BIGGA House, to mark a quarter of a century of Toro Student Greenkeeper of the Year.This unique evening attracted almost every winner in the competition's history along with key figures through the decades. All the winners who attended were presented with a special watch as a memento.

Lely's UK Managing Director Graham Dale addressed the attendees explaining how the competition began and how it has evolved before Euan Grant, 1994 winner and now Course Manager at Turnberry, outlined how much his win has helped his career and that of many others.

The speeches were concluded by BIGGA CEO Jim Croxton, who thanked Toro for their hugely generous quarter century of sponsorship, and Barry Beckett, Toro's Senior Marketing Manager. The Toro Company and Lely UK were instrumental in creating the awards with BIGGA in 1989, and have sponsored the competition throughout its entire 25-year history.

Barry added: "Toro and Lely are proud to be associated with such a worthwhile scheme that recognises young and rising talent in the greenkeeping industry. We thought it fitting to mark the awards' 25th anniversary with a special celebration - bringing together winners, judges and others, past and present - and I'm delighted the occasion was such an outstanding success."

Thanks to all the winners who travelled from far and wide to attend and everyone else who contributed to the event.