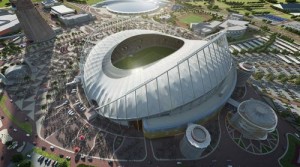 The stadium, which originally opened in 1976, is undergoing its second major redevelopment, following a restructuring in 2005, in order to host the 2006 Asian Games. At the time, Cox Architecture and its JV partners PTW and GHD upgraded the open-air facility from 20,000 seats to a partially covered 50,000 seat venue.

The current works on the stadium will see capacity set at 40,000 and it being brought into line with FIFA requirements - as well as the introduction of innovative cooling technology to ensure an optimal temperature for fans and players.

To help with the cooling, Khalifa will be sheltered under a new "tent" roof structure, which will cover around 70% of the stadium.

Facilities at the stadium will include food courts, retail outlets, multi-purpose rooms, VIP lounges and a health center. The stadium will also host the 3-2-1 Qatar Olympic and Sports Museum.

Khalifa Stadium - which has played a leading role in Qatar's plans of becoming a host of major sporting events - is located within the Doha Sports City complex, which also includes the Aspire Academy, Hamad Aquatic Centre, and Aspire Tower.

"Khalifa International Stadium is moving to new heights with structural work in concrete and steel, and the vertical structure is now at level eight while strengthening works are also underway. We expect the stadium to be handed over by the main contractor at the end of 2016."

For the original article, visit sportsmanagement.co.uk.