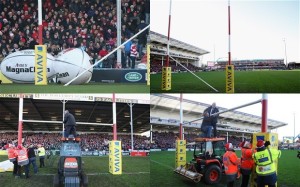 The pantomime season came to Kingsholm on Sunday when the kick-off had to be put back 30 minutes after the crossbar of one of the goalposts was dislodged by two inflatable giant rugby balls.

The ten foot-high balls were being used by two teams of supporters who spent five minutes unsuccessfully trying to get them over the crossbar.

A tractor was driven across the in-goal area and parked under the posts before two groundsmen clambered on top of the cab and re-attached the crossbar.

There were chants of "you don't know what you're doing" from supporters in The Shed when it was announced that the kick-off would be delayed but the decision was taken by referee JP Doyle after consultation with both directors of rugby Nigel Davies (Gloucester) and Dean Ryan (Worcester).

"You can't be controlled by TV schedules, we need to make the right decision and both myself and Nigel said that whatever point it is we need at least 15 minutes to get ourseleves back into the right space otherwise we are not doing the game justice," said Ryan, a former Gloucester coach.

Article sourced from The Telelgraph