Kim Macfie to retire from Hayter 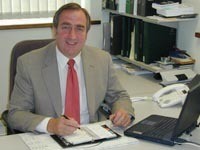 In announcing this news Derek Boulton, Hayter's managing director, paid tribute to the contribution Kim has made to Hayter's success over his eighteen years with the company. He has played a significant role in building one of the best sales and marketing teams in the industry.

Kim has been involved in the trade for most of his working life. In the early years he spent time on the road in his native Scotland learning his craft the hard way. He then joined Cowie's Eastern Tractors where he managed the Grass Machinery Division. From there he moved to Hayter. During his years in the industry, Kim has also played a significant role in trade organisations too numerous to mention. One organisation in particular that has taken much of his time is the Agricultural Engineers Association and especially the Outdoor Power Equipment Council where his contribution has been outstanding. His colleagues on OPEC know him as a tireless campaigner for the best interests of the machinery industry and will miss very much his involvement.

Commenting on his decision to retire, Derek Boulton said, "I have been privileged to know Kim for a short while only but have very quickly appreciated the esteem in which he is held. I know I speak for his colleagues and numerous friends in wishing him a long and happy retirement. Kim leaves Hayter in excellent shape to cope with the challenges of the future. It's my aim to build on Kim's legacy, and to preserve all that is best about the company as the industry knows it".