King's Ely was initially established to educate the boy choristers of Ely Cathedral over 1,000 years ago. Today it is a vibrant and dynamic co-educational school that, within its 70 acres, has over 35 acres of sports grounds/pitches 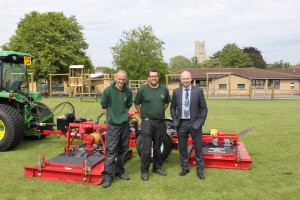 King's Ely is renowned for two main sports - rugby and cricket, but also hockey, netball, football and athletics play a big part along with tennis, squash, badminton and golf. In October 2014 they took delivery of a Progressive TDR15 tri-deck roller mower from The Grass Group.

Will Temple is Grounds and Gardens Manager and Chris Young is Head Groundsman.

They chose the Progressive because of its power, speed, quality of cut, finish, maintenance and the overall cost effectiveness. Maintenance was a big factor but as the Progressive has few gearboxes, and is belt driven, maintenance is easier than the Major they had before, making it a big saver in time and cost.

"We heard about the Progressive after a recent deal was done between King's Ely and John Deere to change core equipment," said Will. "Our old Major was starting to show signs of wear and beginning to rack up costs on spare parts. Adrian Brown at their local dealer, Tomlinson's, recommended the TDR15 and put us in touch with The Grass Group."

Chris takes up the story, "We hadn't done a lot of research but we had looked at it online and watched some videos and could see it was an impressive piece of kit. Also, we'd also seen other schools had purchased the Progressive from good write-ups in the press so all in all it certainly looked good to us. After the relatively short demo we were confident in the machine and went ahead with the purchase."

King's Ely specified the optional stabilising kit (now fitted as standard) as they would be doing quite a lot of road travelling with the machine. The two side arms could have a bit of movement in them when going over speed bumps and could lead to damage. The stabilising kit fixes that.

Having had the benefit of nearly 10 months usage Chris says the big build-up of grass is easily removed by reversing the unit; and Will says they've had no problems "wheel marks have not been a big issue like the old Major, and it stripes up lovely!"