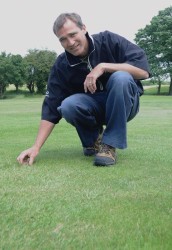 If, like me, you are fascinated by turf and, in particular, turf associated with golf and dominated with fescues and bents, then products that can give you an advantage in out-competing the less desirable coarse grasses that might invade your swards are going to be of interest.

This is exactly how I felt back in early 2007 when I got a phone call from Simon Barnaby of Syngenta. "Can you do some trial work for me, I've got a product you might be interested in" was the message. "Let's meet up and I will explain further."

So, a few days later we met and Simon explained that Syngenta wanted to evaluate a new product that would effectively remove coarse grass from fine turf swards without damaging the finer grasses. If the trials were successful then the product would be launched onto the market and greenkeepers would have something in their toolbox for combating the age-old problem of dealing with coarse grass effectively.

I have been course manager at Kings Hill Golf Club since its inception some fourteen years age. It was built during the last golf boom of the early nineties and, like many of that period, was built on land that had had a number of previous uses. Kings Hill was a mixture of old WW2 airfield, arable, fruit and hop fields, so ranged from some established mature grassland on the airfield to unmanaged scrubby hop gardens on the other. As you can imagine, after the first few years where the majority of fescues sown during the construction had established well, the golf course looked and played extremely well.

However, after a few droughts and an increase in play, coupled with the usual seasonal cycles of weather, some areas of the course, particularly where construction issues had prevailed, started to show signs that the seed bank from the original land use was going to become an issue.

Coarse weed grasses began invading and establishing within the dominant population of fescue and bents. By 2005, in some areas, we had got to that stage in every new golf course's life where clumpy rye was starting to make the swards look and play poorly, which didn't make us feel great.

Like most greenkeepers who have faced this situation you have two or three choices. Mow lower, re-turf, or grin and bear it until the rye takes over completely and you have a mixed sward. Fortunately for us, Simon's phone call came at just the right time.

Subsequent visits by Simon, coupled with course walks to identify areas that would be part of the trial, followed. Then, in June 2007, the first bottle of product arrived with the necessary instructions for application. Four fairway areas were chosen for the initial trial, all displaying rye encroachment into the fescue bent swards and with varying sizes of ryegrass patch from 2" up to 12" diameter. The fairway areas were also split into fourteen separate one metre squares that would be receiving different timed applications to see if different months of the year produced different levels of success.

Initial applications, in July 2007, proved positive and, as this was a wet summer, there were no issues with product uptake. After fourteen or so days clorosis had started and the rye grass was looking decidedly weak. After thirty days total kill looked inevitable. However, after a spell of rain, new shoots started to emerge from the crown of the plants and re-establishment occurred in a less dense and slightly more open form. Further applications in August and September produced the same result where total kill of the rye never materialised.

Whilst all this was going on Syngenta had been working on a new formulation of the product where an adjuvant would be used to help the product penetrate the waxy rye grass leaves. Obviously, from the initial trial, the product was effective it just couldn't finish the plant off.

The new formulation became available in October 2007 and was in two bottles that had to be mixed at different rates. It was also decided at this point to dispense with the one metre square plots and chose 1500 to 2500m2 fairway areas as applications were going to be a few months apart and limited to two a year.

Again, applications would take place in different months on different fairways to gauge effectiveness. The introduction of different renovation methods would also be used to see how the larger patches could be re-established quickly.

The first application of the new formulation took place in late October 2007 and, again, after fourteen days, discolouration started. After thirty days the rye grass had taken on a distinct reddish appearance and, at this point, we knew that the introduction of the adjuvant had benefited the results we were seeing.

Two months later the winter was well upon us, and the rye had been successfully killed. However, it would be another two months before any renovation could take place and we would have to look at dead patches, some 12" in diameter until the spring.

As April 2008 got underway trials continued with spring applications to some areas. Overseeding was also carried out by mechanical methods on some fairways while others were divoted. Other areas would be left to re-establish by themselves. This would establish time frames and the most effective method for dealing with the dead areas.

As the summer progressed it was clear that re-growth of the patches was taking place on some of the areas treated in the spring. However, this time the re-growth was extremely spindly and weak with the patches of ryegrass never able to re-develop to the same extent. It certainly was never able to stalk and produce seed like rye would normally do through the late spring and summer.

The product was acting like a growth regulator, with the benefits of producing a much more even playing surface for much of the year until an autumn application could be made.

Seeding methods were proving difficult, as germination would take place, but establishment would be dictated by the summer weather, as there would be no overhead irrigation to fairway areas.

Divoting and natural regeneration seemed to be the best methods in this instance, as divoting could be done regularly and the seed would have a carrier in the soil that would hold any moisture that fell by way of rain.

On some of the natural re-establishment areas new rye grass would grow from the existing patches' seed bank, along with some small amounts of annual meadowgrass. However, this never really presented any problems as you always knew you were never very far from another application.

Late autumn saw the trials reduced in scale, as we were now concentrating on two specific fairways to understand a programme duration for the product. Fairways 7 and 12 had seen the most trial work and, coupled with the introduction of a revised formulation where the adjuvant would be pre mixed to make applications easier, 2009 was going to be the third year of the trial.

By now, on both these fairways, total rye grass content had reduced by as much as 75% and all that was left to take care of were small areas of re-establishment from the underlying seed bank. Patch size had reduced to no more than 2" in diameter and recolonisation of the existing fescue and regular divoting had restored these fairways playing surfaces and appearance.

2009 applications would now follow, with fairway 7 receiving an application in the spring and autumn, and fairway 12 receiving only an autumn application. This was now effectively the culmination of the trial as the product had shown its effectiveness under most conditions throughout the last thirty months, with excellent results.

Considering the amount of applications that took place over the trial period, at no time did we have any failures. Some applications did vary in their level of control and, don't forget, we were very much developing the product to get to a final formulation. As with any product local conditions, be they timing, weather or ground, will have an impact on expectations. However, by scrutinising the label and application equipment carefully, problems with the products effectiveness can be eliminated

For Kings Hill going forward, a programmed approach to dealing with our rye grass invasions can now be put in place from tee to green and, hopefully, in the not to distant future this ugly competitor in fescue/bent swards can be brought under control.

Trial work for us has been exciting and brought rewards with our turf's appearance. and I would like to thank Simon Elsworth and everyone at Syngenta for listening to greenkeepers needs, and developing and bringing to market a first class product that has many beneficial uses in the presentation and playing quality of our golf courses.