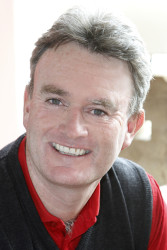 Kingsbarns Golf Links is delighted to announce that Alan Hogg, its new Chief Executive, has taken up the position this week.

Born and raised in Scotland, Alan has spent most of his professional career in Germany. Most recently he spent seven years in charge of the upscale golf resort Golf & Vital Park in Bad Waldsee in southern Germany where he focused on delivering a customer service focused strategy. At the same time, Alan earned an Open University Diploma in Golf Business Management in 2006 at the Institute of Sport, Recreation and Tourism in Düsseldorf.

The former PGA touring golf professional and European Challenge Tour member has also been active in coaching junior golfers and he was named Coach of the Year by the German PGA in 2002. He achieved Master Professional Status in 2007 and was only the 7th out of 2200 German PGA members to do so.