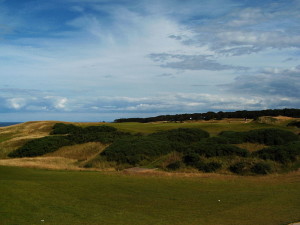 Kingsbarns Golf Links is delighted to announce its selection to host the Ricoh Women's British Open in 2017. Located near St Andrews, the highly rated links course has been a part of the men's European Tour annually for 13 years earning a reputation as one of the most admired venues on the circuit. This will, however, be the first time Kingsbarns will host a Major Championship.

"We are honoured to host the Ricoh Women's British Open in 2017," said Alan Hogg, chief executive at Kingsbarns. "We have welcomed tour events to Kingsbarns for many years but this will be on a different scale. The prestige of the Women's Open is growing every year. More importantly, seeing the very best lady golfers competing over the Kingsbarns links should be very exciting. We are extremely proud to have been selected to host such a quality event."

Consistently ranked as one of the top golf courses in the world, Kingsbarns has co-hosted the Alfred Dunhill Links Championship for over a decade. During this time the course has won praise from touring pros and celebrities alike who admire the traditional Scottish links design with views of the North Sea from every hole.

"What I like is the risk and reward," said Paul Casey, during the 2012 Alfred Dunhill Links Championship. "It is a very enjoyable golf course to play because you can make birdies, you can make eagles but there is a lot of danger out there as well. You've got a mix of the fun stuff and the tough stuff wrapped in a package which is beautiful."

As Hogg explained, however, the Ricoh Women's British Open will provide an entirely new test for the world's best players when the Open arrives in Fife in 2017. "Because of the round-robin format of the Dunhill, the course has to be set up identically over the three days, which includes weather-tolerant pin placements," he said. "During the Ricoh Women's British Open, the full range of hole locations can be utilised on Kingsbarns' large and undulating greens."

The Ricoh Women's British Open will also offer television viewers a first look at a closing stretch that includes some of Kingsbarns' most picturesque holes. The challenging par 5 12th along 550 yards of rugged East Neuk coastline, the stunning par 3 15th, requiring a tee shot across an expanse of the North Sea, or the challenge of the 17th have not been featured before on television. "The closing holes will provide the perfect setting for an exciting Sunday finish," said Hogg. "We can't wait!"

Kingsbarns is regarded as one of the world's best courses holding the top spot in GolfWeek's Top 100 modern courses in the UK and ranked 18th in Golf Digest's Top 100 Best Courses Outside the US. Art Dunkley, director of Kingsbarns Golf Links said: "People have said many flattering things about our course and facilities since we opened in 2000 but being selected to host our first Major Championship is perhaps the greatest affirmation of all. Our objective has been to create one of the world's best links golf experiences and deliver it to our guests with a personal touch. That is something our management and staff members feel very strongly about. The honour of hosting the Ricoh Women's British Open, I believe, results directly from our meticulous focus on providing excellent golf course conditioning and individual customer service every day."

The statement was endorsed by Shona Malcolm, the LGU's CEO, who highlighted the significance of the selection. "We believe Kingsbarns will be a wonderful addition to the Women's Open rota. Their excitement at hosting their first Major will make the 2017 edition very special and we look forward to a long relationship with them," she commented. "Kingsbarns fits perfectly with our commitment of ensuring the world's best women players showcase their talents on the world's best golf courses."

Paul Bush from EventScotland added: "Bringing Major Championships to Scotland, the Home of Golf, outlines our ambition to host the biggest events in world golf and the addition of the Ricoh Women's British Open in 2017 at Kingsbarns further strengthens our envied portfolio of golf tournaments in 2014 and beyond. This is also a great compliment to Kingsbarns Golf Links and shows just how established the venue has become on the global golf map."

After successfully hosting final qualifying for the Ricoh Women's British Open in 2013 when initial assessments were made by the Ladies Golf Union, Kingsbarns is now part of an established Open rota.