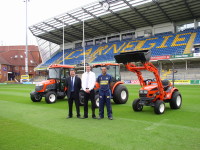 Three Kioti tractors are playing an important part in keeping the pitch at the world-famous Headingley Carnegie Stadium in Leeds and its 35-acre training ground in top condition for the Leeds Rhinos rugby league and Leeds Carnegie rugby union clubs.

The stadium pitch is probably the most heavily used of any rugby pitch in the UK. It hosts around 80 matches a year involving the Leeds Rhinos, who are current rugby league Super League champions and World Club title holders, Leeds Carnegie and other teams. Sometimes three games are played in a single week-end, and the biggest gap between games is less than three weeks, according to head groundsman Jason Booth, who is the current Rugby Football League groundsman of the year.

As there is no time for full-scale pitch renovation, staff are kept busy carrying out small-scale repairs and remedial work continuously all year round. Verti-draining is carried out on the pitch at least once a week, as well as scarifying, top-dressing, spraying, seeding and brushing as required.

As part of a major up-grading of its ground-care equipment, Leeds Rugby Ltd chose three models from the Kioti CK and DK ranges supplied by Longs Groundcare Machinery Ltd, based in Leeds. The two smaller models - a CK20 and CK35 - work at the stadium, while the 50hp turbo-powered DK501 is based at the training ground.

Both the CK models have three-cylinder engines with full hydrostatic drive systems, three speed ranges, cruise control and four wheel drive. The 35hp CK35 has extra-wide turf tyres to avoid damaging the pitch, as well as a full weather-proof cab; while a 0.16m3 loading bucket with a quick-fit system has been supplied for the 20hp CK20.

The DK501 is used for daily grass mowing at the Kirkstall training ground with a two-metre rotary mower and also for scarifying, sweeping/collecting and transporting machinery. It has mechanical transmission with 12 forward and 12 reverse gears, full synchro-mesh and forward/reverse shuttle. The specification also includes two double-acting spool valves, a three-speed PTO with automatic shut-off at headlands, a heavy-duty three-point linkage with articulated adjustment and twin tanks with 68-litre fuel capacity. The cab includes air-conditioning, stereo and sun-roof, and the driver can choose imperial or metric displays on the LCD instrumentation panel.

'We needed three new tractors to do specific jobs at our two locations, and we looked at several different options. The Kiotis have proved an excellent choice', said Jason Booth. 'They were competitively priced with a good specification, and the after-sales service has been outstanding'.

Kioti tractors are distributed in the UK exclusively by Ruston's Engineering, of Huntingdon, Cambridgeshire.