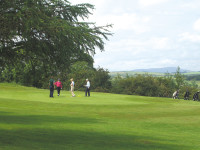 How does a small golf club in Scotland maintain great standards on a not-so-great budget? Can they afford to buy the latest mowers and grinders?

Maureen Keepin visits Dumfries and Galloway to find out

Established in 1893 the Kirkcudbright Golf Club enjoys magnificent views over the Galloway Hills and the Dee estuary. Head Greenkeeper for the past ten years, John Huston, admits to being a 'country bumpkin' who is passionate about golf and the course.

Leaving school at 16 he joined the club as an assistant but was lured away to London and the real world for a five-year period, working at Coombe Hill Golf Club. He was then offered his current post and headed back to his Scottish homeland.

"I am trying to bring this course up to the twenty-first century" says John. "Old machinery and a lack of modern tools was a major problem." As you might expect from a canny Scotsman, he added, "The price of equipment these days is amazing. So, I try to provide enough quality on the course to warrant income to develop the machinery side."

"Coombe Hill taught me an awful lot. It was a pretty well-to-do club and their methods were far in excess of anything done up here. I learned presentation skills, how vital good construction was, the importance of choosing the right grass cultivars and how to use less fertiliser."

"I did very little on the machinery side, as it was a larger club and they had dedicated mechanics to do that. There was no call to set up a machine or look at cutting heights. At a smaller club you do everything, apart from signing the cheques!" Kirkcudbright (pronounced Kir-coo-bree, apparently) is an 18-hole, 5,733 yards, parkland course with a par 69 for men and 72 for ladies. The course has 96 acres of cutting area managed by a staff of three - in comparison Coombe Hill had eleven - plus a course manager. John has been a man short and is looking forward to the return to work of his dedicated first assistant greenkeeper, Klaus Shiller.

So, what are this Scotsman's aims?

Situated in an area enjoying high rainfall and a milder, wetter climate, a general lift in standards was seen as vital for the future of the club.
Environmental management is a love of John's life, that and machinery.

A natural look is kept through good course husbandry and is extended to include items such as seating. A Scottish woodland was planted ten years ago and this planned programme has taken off a lot of the banking at the course.

The only major problems on the course are rabbit control and leather jackets. "Other creatures are welcomed and visitors have included a red panda and a large parrot-typebird with magnificent colours from the neighbouring wildlife park" says John.

In-house grinders have been a vital addition to the club's equipment and an essential aid for improving course conditions. "New grinders have probably been the best investment for our club financially" he says. "I saw the significant benefits when I worked in London."

Previously, grinding had been contracted out. However, the club went out and bought an Express Dual 1000 and Anglemaster 1000 grinders from Bernhard and Company over a five-year period. "We worked out the money we would pay sending out our blades to be sharpened. What it would cost over the next five years allowed us to buy our own and clear the payment. "The club may not notice it, but there are huge savings in having our own grinders."

Sharpening whenever they want is seen as a major benefit and John finds it invaluable for training purposes too. "It means our assistants are trained-up on the mechanical side of things." 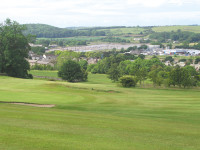 And it is visiting societies and parties who have given tremendous feed-back regarding the high presentation standards of the course. "People want to come again and most of the parties play a minimum of three rounds and sometime seven or eight" says John.

"Naturally, they do compare golf courses and they say this is one of the tops."

A very good aeration programme has been implemented, which has also paid great dividends in improving the course. This includes verti-draining, hollow coring, needle tining and investing in a scarifier unit. Smaller areas are tackled with a Robin Dagger single spiker, which goes down two feet and gives a blast of air. "Consistent aeration is the key to a good surface" John adds.

Jacobsen machinery is used on the course, as a good back-up service is offered in the area, and John feels they are slightly more affordable. Three years ago they bought a second-hand machine, the HR4600 for £18,000. "It is quite a challenge to manage our limited budget" he explains. "We have less than a tenth of the budget of the London club for machinery but I still try to bring their practices and standards into place."

With only a single deck rotary before, to go to a triple-deck was a tremendous advancement in helping to improve quality of cut. "Undulations are quite a big factor here, so we needed the movement in the three decks to achieve the best results."

Now an LF 3600 fairway unit has just been added, again second-hand and costing £11,000. "This was a reasonable investment for us but gives us the option of cross-cutting. Next on the shopping list is a dedicated greens unit."

The club started out with two maintenance programmes on the course, as the original nine-holes were slower growing. The second nine-holes were built on old agricultural land, so had very rich growth habits. Now they have achieved far greater consistency.

On the sward-side, improvements were commenced six years ago when a pure bent mix was introduced on the greens. Starting off with Denso and Sefton, for the last five years they have topped up with some Highland, which has been affordable and the seed provides good coverage. Overseeding takes place regularly, as there is a high percentage of poa on the greens of some 40 to 50 per cent. This year the club has switched back to Denso, as they find rotating the seed gives best results.

AS a golfer himself, John acknowledges that there is a lot of competition in the sport.Enjoying an increasing membership, now standing at 500, the club also boasts 100 under-17 junior members. This strong element is down to older members encouraging them and the juniors being given their own tee times on a Thursday afternoon and Saturday morning. John sees this as the future of the club saying "I was a member here myself from the age of five."

Spirits were extra high on my visit, as the previous evening the club had won a team golf event, which all clubs in the area participate in at a rotating venue. The club is proud to have hosted a British University Championship and a South of Scotland trophy event.

John's training has come mainly from other greenkeepers and he says "It makes a tremendous difference who you are being taught by. Sandy McKechnie had a tremendous influence on my training, which has been the hands-on approach.

Personally, I still think there should be a higher percentage of on-course training.

Learn about cultivars and seed mixes, yes, but come back to the real world as well and put it into practice."

Through Ransomes Jacobsen, John was able to visit the GCSAA show in Atlanta last year, where he felt he learned a considerable amount through discussions with US superintendents and his UK counterparts. "Being one of the smaller clubs it is always good to learn from what other people are doing."