Now is the time to start on the invasive weed control before it is too late.

Dealing specifically with Invasive Weeds, prevention is often better than cure. In order to establish weed control strategies during spring and early summer we need to know our enemy. This will save money, time and increase the efficiency of control methods.

In this article I aim to assist with the identification and treatment methods to ensure effective control.

To recap the last few articles, the invasive species that we should be aware of at this time of year include Japanese Knotweed, Giant Hogweed, Ragwort, Himalayan Balsam, Devils Apple, various Aquatics and Goldenrod.

The latter of these may not be too much of an issue outside of the garden environment but, perhaps, warrants a mention nonetheless.

The first step with any control strategy is to identify the nature and extent of the problem. Plant identification at these early stages is critical and, sadly, not that simple. The majority of dicotyledonous plants look remarkably similar when they first emerge from seeds. However, as the main leaves emerge and the plants start growing then the differences become noticeable. 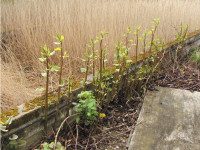 One thing all invasives have in common is the fact that they can pioneer areas of land that receive low maintenance or have low levels of natural vegetation. One of the key factors for reducing future infestations is to establish maintenance regimes involving re-establishment of natural vegetation, such as grass swards, planting, mulching and the like.

To start with I would like to look at Japanese Knotweed (Fallopia japonica). Early detection of the plant is essential, however, treatment should not be undertaken until such time as there is sufficient leaf growth to effectively receive herbicide applications.

Should the infestations not be identified, and general mowing takes place over the plant, then the infestation could easily be spread and the problems of treatment compounded, resulting in large no go areas and future treatment headaches. Identify the areas and isolate accordingly. Do not allow mowing or strimming to be undertaken and be patient.

Once isolated I would recommend calling in specialists to deal with the plant, to set up herbicide programmes and eradication methodologies. Once completed - which could be up to 5 years - re-establish native or desirable vegetation to reduce the risk of re-infestation. 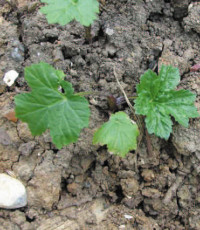 Pic ( L) Hogweed seedling. Giant Hogweed (Heracleum mantagazzianum) is a plant that is essential to deal with early in the season. If left, even for a couple of weeks, the plants can become so large as to cause severe hazards to operatives and effectively becoming too large to control. Giant Hogweed has the ability to grow at an incredible rate if conditions suit. Trust me - I know from personal experience and it is something that I would never have believed had I not witnessed it for myself. Two weeks of rain and the project was put on hold for a year!!!


Giant Hogweed should be dealt with both at a first year seedling stage and the second year growth stage. During the first year the plants are small and look very similar to Common Hogweed. During the second year the leaves become much more serrated and instantly recognisable. A spot treatment with Glyphosate should suffice providing that the plant is at a sufficient growth stage to allow for good coverage. Other selective chemicals such as Triclopyr and 2,4-D Amine are also worth using, allowing for the surrounding grass sward to be unaffected.

Alternative methods of control include ploughing and introducing sheep and cows to the area. Both are a little extreme but effective none the less.

Ragwort (Senecio jacobeae) is a much talked about plant, striking fear into the hearts of horse owners and highway maintenance managers alike. Again, early treatment of the plant in both rosette and flower growth stages are essential to reducing the impacts of the plant.

Whatever you do, do not pull the plant. Removal by pulling will lead to the long term spread of the plant and is not to be recom

Regular mowing of Ragwort plants will not succeed in killing the plants, merely force the plants into a perennial rosette habit, to re emerge as flowers and seeds when conditions suit. Early treatment will also save the panic that arises as the bright yellow Ragwort flowers become visible. Perhaps the Highways Agency should be more proactive - it would save so many public complaints. One day…..

Devils Apple (Datur atramonium), Goldenrod (Solidago ssp) and Himalayan Balsam (Impatiens glandulifera) should be dealt with prior to flowering and as soon as there is sufficient leaf surface area to apply herbicides effectively. As with all of the invasives, prevention being better than cure, look at the source of the infestation and deal with that if possible. If not, then spot treat the plants with herbicides such as Glyphosate, 2,4-D Amine or MCPA and try, where possible, to establish natural vegetation to offer competition to re-infestations.

Of all of the invasive species, Aquatic Weeds have the potential to cause the biggest impact, both aesthetically and environmentally. The growth rates of these are sometimes staggering, going from the initial plant to full scale infestations in a matter of weeks. Treatment of Aquatic Invasives is not straightforward.

There are non chemical systems available such as the Ultra Sonic equipment that can effectively control algal blooms and blanket weed. However, these will not affect the invasive species such as Water Hyacinth, Parrots Feather, Floating Pennywort, Australian Swamp Stonecrop and Water Fern. Regardless of the species of the aquatic invader, the symptoms, problems and control strategies are all much the same.


There is some very detailed information available on the web site www.ceh.ac.uk and www.t-c-m-rd.co.uk Please take advice before tackling any aquatic species. The results of a poorly managed strategy could make the problem worse, not only for yourselves but also for those downstream.