by Charmian Robson
in Machinery & Mechanics
on 28 Dec 2016 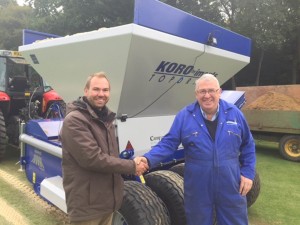 Bourne Amenity has seen a dramatic increase in the speed they can carry out drainage works along with labour and time savings since purchasing a Koro TopDrain 1500 from Campey Turf Care Systems.

The decision to obtain a machine from Campey came after consistent recommendations for it to be used on projects by varying consultants, prompting contracts manager, Alex Lingard, to research the TopDrain.

After carrying out this research, comparing it to their previous machine and speaking to Campey directly the decision was made to make the purchase. Bourne Amenity’s new TopDrain has already been booked for use on rugby and football pitches as well as at East Sussex National Golf Club, and Alex is looking forward to what it will offer other clients in 2017.

“The time and labour saving is the main selling point of the TopDrain,” Alex began. “Installing three runs with the Top Drain can be done twice as quick as we could do one run with our previous system, making it 6x faster.

“I was first made aware of the TopDrain through YouTube videos and was very impressed at how clean a job it did, not to mention how cost effective and efficient it was. I had done the research and dealt with Campey many times before, and found their customer service to be outstanding. This made us very comfortable with the purchase.

“We could see the opportunity for it to save us not hours but days of resources and labour charges, and leave a job in a very professional manner with a happy client having their surface out of action for a fraction of the time.

“As a company we are really looking forward to unleashing this bit of kit to the south of the UK.”

The TopDrain beats conventional methods because of its unique multifunctional process. During one pass it trenches, removes spoil, injects sand and re-compacts the surface, with significant material and labour saving, faster processing times and less surface contamination. It completes three trenches in a single pass, giving it a superior edge on other machines on the market.

The trenches are 200mm in depth, allowing them to meet the carrier drain, are 40mm wide, making them thin enough to restrict too much percolation through the soil profile, and have 500mm spacing, allowing 40% of the top soil profile to drained.

The sand grid created by the TopDrain complements existing drainage systems, with the sand filled trenches enabling surface water to be promptly removed through the profile and taken away by the present drainage system. The concise working of the machine means any surface it is used on is out of action for less time than conventional methods, which is a significant benefit to both contractors and clients.

The expectations Alex had for the machine have already been exceeded, and it has started to garner interest from all areas including private schools and council run pitches. The company also have hopes that the TopDrain will open doors to the higher end grounds in the area, a testament to just how impressed they have been with the machine.