Agricultural, Groundcare and compact construction machinery specialists, Kubota UK has this month announced its official partnership with Andrew Hoy Eventing as part of a collaboration that will see the four-time Olympic medal winner become brand ambassador for the orange-liveried manufacturer. 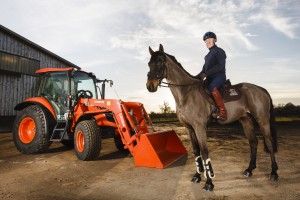 The partnership was officially announced this week following the handover of a Kubota M6060 60HP 4WD agricultural tractor, which is being loaned to Hoy to help maintain his 23-acre Somerby Stables; a site at which the Hoy Team has been based since December 2013.

Hoy has had roots in the UK for over two decades, but his association stretches back to 1979, the year in which he won his first UK event (Burghley Horse Trials) - coincidentally, the same year of Kubota's establishment in the UK.

"This is a fantastic partnership for both parties and there's a definite synergy between the two brands. Kubota is world-renowned for engineering excellence, reliability and for leading the market in its field. Excellence is something that I strive daily to achieve, so it's important for me to partner with a brand that shares a similar ethos to my own - Kubota does that," explains Hoy.

"Kubota's market-leading M6060 tractor will be a welcome addition to the site and will prove an invaluable tool for our work here at the stables, to help maintain the extremely high standards that we set."

The picturesque Leicestershire location, complete with 32 Monarch Stables, offers some of the world's best equestrian training facilities for Hoy, his team and his students. Alongside indoor and outdoor arenas, the Somerby Stables includes a grass track for hill work, tack rooms, wash bays and tacking-up areas, a Monarch Horse Walker and substantial turnout facilities.

Kubota's help towards the upkeep of the facility is just the start of the pair's collaboration though, and there are already some exciting plans in the pipeline, more details of which will be announced over the next few months.

Dave Roberts, Kubota Managing Director commented: "Andrew Hoy is celebrated across the globe for what he's achieved in his sport. For Kubota to partner with a competitor of Andrew's stature, who's won a handful of Olympic Gold medals and competed at the highest level over three decades, is a real coup for us.

"Andrew's stables train some of the world's elite athletes and the next generation of potential Olympic competitors, so the association between Andrew and us promises to be hugely positive for both parties and we're looking forward to working together over the coming months and beyond."

For more information on Kubota and its extensive range of solutions for the agricultural industry visit www.kubota.co.uk or call 01844 268000.