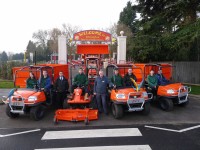 A fleet of Kubota machines, consisting of three RTV900 all-terrain utility vehicles, an L5240 tractor and an F80 outfront ride-on mower, has boosted efficiency at the famous Chessington World of Adventures & Zoo.

The 80 acre Surrey theme park, one of the premier family attractions in the South East, is visited by around 1.25 million people each year.

Chessington is extremely proud of its landscaping and has a dedicated 10-strong team who ensure the theme park is an attractive place to visit all-year-round. The full-time team is joined by seasonal workers during the busy summer months.

The Kubota machines were leased earlier this year from local Kubota tractor and groundcare equipment dealer, Lister Wilder, of Ockham, Surrey, on a contract hire basis. They replaced a mixture of elderly machines of different makes, which needed constant maintenance to avoid prolonged downtime.

Chessington's Landscape Manager, David Hill, said there were significant benefits in having all the new equipment provided by one supplier. "We now have a comprehensive set of machines that work well and have never let us down. We have substantially reduced our maintenance costs and become far more efficient as we can now plan work in advance knowing that we have the right tools for the job ready to go."

The three Kubota RTV900 all-terrain utility vehicles experienced a 'baptism of fire', albeit a cold one. They were delivered at the beginning of February, just days before the site was blanketed with nine inches of snow.

"Their first job was to move staff and animal feed into the zoo so that the animals could be fed," said Hill. "Getting through the deep snow proved no problem with their four-wheel drive, and would have been impossible with our former non-Kubota two-wheel drive utility vehicle. Without the Kubota's we could have been in serious trouble."

They also helped to clear snow from the large car park outside a hotel on the park's site, where 100 guests were stranded.

Aside from the emergency work, the versatile two-seater RTV900s are proving ideal workhorses, taking landscaping staff to and from jobs quickly and easily. They also fetch and carry a wide range of materials around the heavily contoured site, such as turf, tools, building equipment and large water bowsers. The staff make full use of the vehicles' hydraulically-tipped rear cargo box, which measures 1.32m wide x 1.18m long x 0.29m deep and has a 500kg load capacity.

One of the utility vehicles was supplied by the dealer kitted out for on-road use. This is so it can transport staff and materials to a nearby roundabout which the landscaping team maintains to promote the park.

"It's much better having three utility vehicles," said Hill. "With only one, staff had to wait around until it was free, so we now get jobs done far more quickly than before. The Kubota's are extremely versatile tools which cope well with whatever we throw at them."

A West composter is fed with green waste from the park and animal waste from the zoo, producing up to 200 cu m of compost per year for use as mulch. The waste is collected on trailers and hauled by the tractor to the composter where it's off-loaded by a grab.

The tractor's PTO is then connected to the composter so that it can be powered by its engine, with the composting process taking 30 minutes. A conveyor belt drops down into the tractor's trailer to load it with the freshly made compost, which is left in piles to mature for six months before being used. The tractor then delivers the mature compost in its front bucket to where it's needed.

"The tractor gets through much more work far more quickly than the model it replaced, as at 52hp it has more than twice the power," said Hill. "It's a nifty machine for getting around the site, even within the confines of the theme park, and the lads love using it because of its comfortable cab with its air conditioning and radio."

As well as its regular composting duties the tractor hauls trailer loads of bulk materials and heavy equipment around the site, often delivering them to the RTV900s.

It also pulls a large flail mower used for the twice-yearly cutting of areas of long grass, and a chipper for reducing green waste.

The Kubota equipment is normally used between 7.00am and 10.00am, before the park is open to the public, so the quicker the work can be carried out the better.

"We spoke to several possible suppliers before opting for the Kubota machines, which are ideal for the wide variety of jobs we need them to do," said Hill. "Our local dealer, Lister Wilder, took us to the Kubota headquarters in Oxfordshire where I was impressed with the size of their spare parts holding. We knew that between them and Kubota we would never be let down on parts or service. After the deal was clinched and the machines delivered, Lister Wilder then came on site to train members of our landscaping team in the machines' use."

David Hill said that the company's accountants liked the contract hire arrangement, which comes with a full service plan. "It means that we should have no major equipment maintenance costs for the next three years, when we will replace all the machines with new models."

Kubota machines have a legendary reputation for quality, performance and reliability, with a national network of specialist dealers, such as Lister Wilder Ltd, providing the highest standards of support and aftersales service.