The cream of Kubota UK's service team gathered in September for the first Kubota Skills competition in the UK, an event that seeks to put the technical competence of its staff to the test 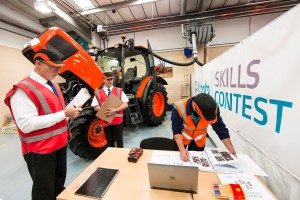 The event has long been an annual fixture in Japan, but the decision was taken this year to follow their lead and roll out a UK-specific event to test Kubota staff and serve as prelude to the launch of the Kubota National Dealer Skills Competition in 2016, which will widen the entry to include technicians working at dealerships across Kubota's UK network.

The flagship UK competition - the culmination of a decade of growth and significant investment in the service department - opened with an introduction from Kubota UK MD, Dave Roberts, who was joined by representatives from Kubota Japan and Kubota Spain, who were in attendance to gauge success, with a view to rolling the event out across other sales centres in Europe.

The stakes were high for the six competitors taking part in the inaugural event (the youngest of which was only 21 years old), as the winner would go on to represent Kubota UK in Japan in December, competing against other Kubota sales territories for the coveted 'No.1 Technician' Gold accolade.

The assessment criteria for the competition was twofold: a written, hour-long assessment followed by an intense 90-minute challenge, with competitors tasked with diagnosing and fixing five faults on the Kubota M110GX-II tractor. Each was judged not only on their ability to remedy all five faults, but also to demonstrate the method behind their decision making process.

Keith Miller, Service & Training Manager commented: "A huge amount of work has gone into preparing for this event, to ensure that we deliver a slick and professional event for our team. We are very proud of the six who took part and of their abilities when put to test under exam conditions.

"Whilst the first priority for today was to test the service skills of our staff and demonstrate Kubota UK's service excellence, the event also served as a dry run for next year's dealer skills competition, which will be run in the same fashion. Our dealer network is made up of highly skilled, highly professional individuals and we think it's important to celebrate that and test the expertise of those working with Kubota machinery in the field day in, day out.

"It was important for us to make today not just tough, but fun and engaging, and something that our dealers will be excited to get involved in. There's also the opportunity for healthy competition between dealers to take the UK crown and compete against their counterparts on the world stage."

After a feverish day of diagnosis one of the youngest members of the Kubota service team, James Westbrook was crowned champion having completed all the tasks in the allotted time and demonstrating competence and method in his diagnostic process.

"It's really encouraging to see the level of skill and aptitude within our service team and we congratulate James on his victory. The opportunity to travel to Japan to compete will be a valuable experience as part of his career development and we hope that our dealers will also recognise the value in taking part for their own staff and for the reputation of their businesses, with the Kubota stamp of approval being considered a badge of honour to wear with pride."

By 2018, it is the hope that all Kubota Companies worldwide will compete together in a 'World Cup' contest with two 'Global Technical Champions' emerging, one from Kubota staff and the other from the dealer' representatives.