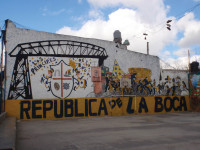 There is no doubt that Latin Americans love their football. Get into any Central or South American taxi and the first question the driver will ask is, "De dónde eres?" (Where are you from?), hoping that you will either answer Manchester or Liverpool; they invariably have a flag of one of these teams hanging from their rear view mirror.

Their passion for football, in fact, is so great that, in the past, it has even precipitated wars. One infamous example is the notorious 'Football War' of 1969 between Honduras and El Salvador. Although only lasting four days, the warfare between these two nations following a heated World Cup qualifier, resulted in 2000 people dead and thousands more injured or displaced.

Therefore, when I travelled to Latin America earlier this year with my friend, Rebecca Turner, we were looking forward to witnessing some of this passion (though perhaps not quite to the extent of 1969). Furthermore, as our travels coincided with the build up and play of the World Cup, we were not to be disappointed. Football fever had definitely hit Central America. Most notably was the passionate Honduras 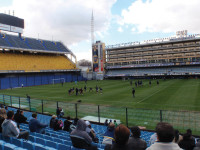 (of 1969 fame) where the country's flags abounded and merchandise was for sale on every sidewalk - this is understandable when you consider that Honduras has only qualified once before, way back in 1982!

Additionally, this excitement was not restricted solely to home teams - in Copacabana, Bolivia for example, we were invited to watch the Argentina v Germany match with the friendly owner of our hotel and his family. Although they spoke no English, and our Spanish left a lot to be desired, we managed to have a very broken conversation about the 'psychic' German Octopus. Football clearly transcends language barriers!

By the time we reached Argentina, the World Cup had long since finished. Enthusiasm for football, however, still persisted. This was, undoubtedly, most evident in the lively and enchanting capital of Buenos Aires, home to the much-loved Club Atlético Boca Juniors. This team is a source of great pride and passion for Argentineans, 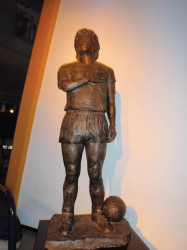 So much so that it had been nicknamed, "la mitad más uno" (half plus one), reflecting the fact that pretty much half of Argentina's population supports the team.

This popularity is not unfounded. From it's humble beginnings in the poor La Boca neighbourhood in Buenos Aires, the team went on to achieve great success. Founded in 1905 by five Italian immigrants, the team played in local leagues until it was promoted to the first division in 1913. From here, the club went from strength to strength; it won the first professional Argentine title in 1931 and went on to win eighteen international titles. In the process, it has produced some of football's greatest legends: Diego Armando Maradona and Carlos Alberto Tévez to name just two.

At the heart of this successful team is, undoubtedly, the CABJ Alberto J. Armando Stadium, known universally as 'La Bombonera' (the chocolate box). La Bombonera is, arguably, as important as the team itself, being an integral part of the team's identity. I was able to witness this first hand when I visited the stadium in August.

What immediately strikes you (well, after the bright blue and gold paintwork) is the intimacy of the stadium - although boasting a capacity of 50 000, the stadium feels relatively small and enclosed. This is partly because only three sides of the stadium have traditional sloping stands; the fourth had to be built vertically due to land restrictions. 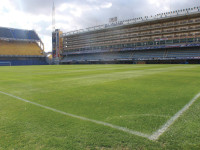 This more enclosed nature of the stadium, combined with the passion of Boca supporters, inevitably leads to a great atmosphere during matches, especially in the Superclásico against their main rivals, River Plate. This atmosphere is so great that La Bombonera is renowned for vibrating when fans start to jump in rhythm, which has subsequently spawned the phrase, "the Bombonera does not tremble. It beats." The stadium is clearly where the passion for Boca Juniors comes alive; it is literally CABJ's beating heart.

Clearly then, La Bombonera fulfils its function in terms of supporter satisfaction, but does the pitch itself achieve this standard?

I have to confess here that I am no groundswoman, and do not really know where to start when it comes to judging pitch quality and grounds maintenance. Additionally, I unfortunately did not have enough Spanish to interview the groundstaff, which I'm sure would not have stopped my dad (Laurence Gale) if he had been there! 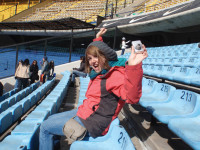 However, from a lay person's point of view, I can say that the pitch generally looked relatively healthy and very green. You can judge for yourselves from the photographs!

Unfortunately, our trip ended before the football season began, and we were, therefore, unable to attend an actual match at La Bombonera - the most we saw was some pre-season training.

Our visit to the stadium did, however, give us an insight into the passion of Boca supporters and revealed the importance that a stadium can have for a team. This Argentine passion for a team and it's stadium is perhaps, in it's simplest form, the epitome of Latin America's ingrained love for "The Beautiful Game".