by Louise Challiss
in Machinery & Mechanics
on 14 Oct 2018

With customers ranging from Birmingham City FC, Wasps Rugby and Warwick School, no two days are the same for contractors, Lakeside Grounds Maintenance. To cope with the versatility required to work on multiple sports surfaces and grounds, Director Gareth Fowler-Simons has just invested in his second Verti-Drain 7526 from Charterhouse Turf Machinery, taking his total fleet to four! 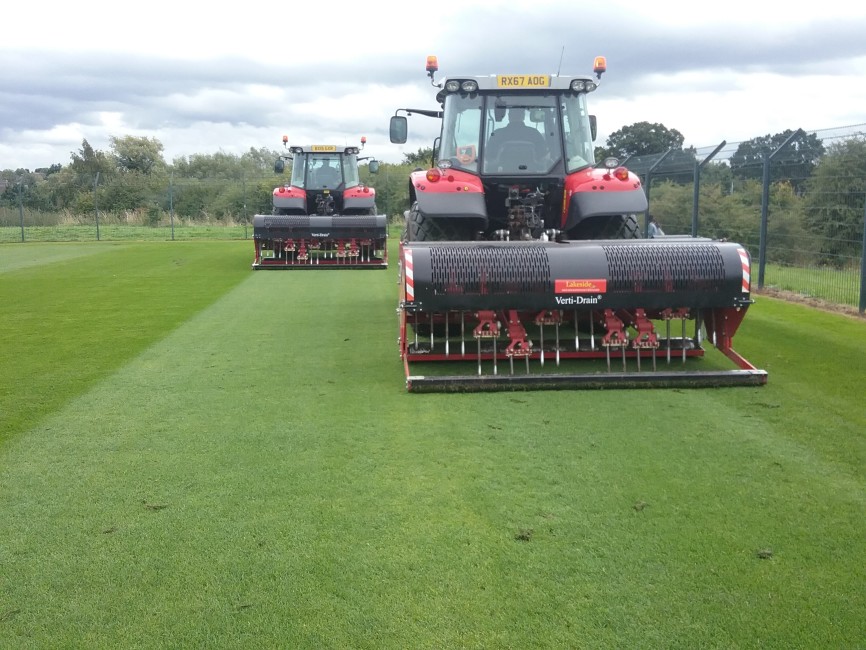 Established by Gareth's father over 30 years ago, and now with a team of 10 guys on the road, Lakeside GM conduct grounds and sports turf maintenance in and around the Midlands. "Aeration is one of those staple maintenance procedures that goes across the board, no matter the surface you're working on" explains Gareth. "We took delivery of our very first Verti-Drain, an ex-demo model, roughly 20 years ago. We looked at alternatives at the time and decided that it was the best built unit, as well as being the most cost-effective. When we advertised that we had one, we picked up a lot of work which saw us quickly adding a second unit to cope with the demand."

In the last five years Gareth and his team have continued to see growth, enough to justify the investment in two further Verti-Drains, this time opting for the largest model available. "I spoke to Richard Lucas at Saltex a couple of years ago and on the back of that, he set up a static unit for me to look at. Without even seeing it in action I was happy that if it was going to perform half as well as our smaller units, we'd go for it. Having the two Verti-Drain 7526's in our fleet now means we can continue to provide a quality job but in a shorter space of time, minimising disruption for the customers and maximising efficiency for my team."

"During autumn and peak renovation times, our Verti-Drains are out on a daily basis and have so far delivered exactly what we're after from a machine, with no dramas. With Charterhouse offering the large 2.6m machines, that are simple to operate and offer fantastic reliability, we'd have been foolish to go for anything else."