0 Amazone to exhibit at trade show

The 2015 show season kicks off in January with the second LAMMA Show to be held in Peterborough. With major changes to the showground's infrastructure, and a new access off the A1 direct into the car parking, this year's event promises to be bigger and better than ever. For Amazone at LAMMA, there are also two stands this year, one for Ag machinery (R33) and one for Groundcare (Hall 5, Stand 501): 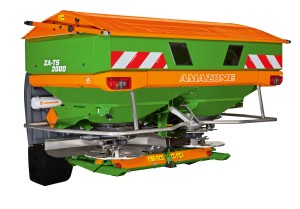 750,000 twin disc spreaders sold will be the theme for Amazone on Stand R33 out in the cold at LAMMA this year with this major achievement being celebrated by the launch of the new mechanical ZA-TS spreader. The ZA-TS was launched in 2013 in its Ultra Hydro specification with a payload of 4,500 kg, a hydraulic disc drive and spreading widths up to 54 m. The adjustment of the AutoTS border spreading system, and that of the Delivery System, was carried out electronically from the tractor cab over the ISOBUS terminal. Early this year, the ZA-TS Super was launched, with a reduced payload of 3,200 kg, but now, for 2015, the ZA-TS will be available in a mechanically-driven format with a new narrower hopper - just 2.6 m wide for safe road transport in narrower lanes. Also the AutoTS System is now supplemented by ClickTS which is either the complete mechanical control of border spreading, or a combination of one-side electric and one-side mechanical, both at a reduced cost. The mechanically-driven version still offers 8 section part-width shut-off via GPS-Switch and can also be specified without a weighing system. A new mechanical adjustment of the Delivery System option, meaning that the fine-tuning of the spreading width is carried out down at the spreader, is also available as a downgrade.

A mechanically-actuated roll-over cover and simplified parking stands in lieu of the hydraulic cover and the swivel rolling and parking device are also now available. Hopper sizes run right through from 1,700 litres through to 4,800 litres and prices for the new lower-specced ZA-TS models start from £13,475.

From Amazone, the CCI 100, AMATRON 3 or AMAPAD ISOBUS terminals are available and all offer documentation, variable rate spreading or SectionControl via TaskController BAS, TaskController GEO or TaskController SC respectively. Opera-tion can also be carried out via a third party ISOBUS controller but, however, subject to their specific TaskController availability. 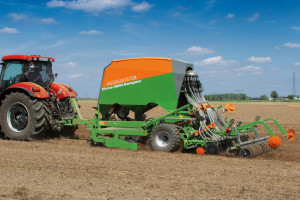 The Cirrus 03, both in 3 m Compact and 6 m grain and fertiliser models will be on show. The Cirrus 3003 Compact made its debut last year at LAMMA 2014 and the new RoTeC pro coulter system has since proved its worth with excellent germination and seed spacing being seen in the field. The acreage of cereals being sown with a booster dose of phosphate down the spout continues as well to increase year on year and the 4,000 litre pressurised split tank on the Cirrus 6003-2C means two different crops or grain and fertiliser can be sown simultaneously. This means, for example, that as well as cereal sowing with fertiliser, a companion crop can be put in alongside oil seed rape or two different cover crops can be sown together at two different seed rates. The AD-P power harrow/drill combinations will also feature on the stand.

Catros helps in fight against Blackgrass

On the cultivation front, a folding 6 m Catros compact disc harrow will be on show alongside the Cayron 200 V 5 furrow reversible plough. Both compact disc harrow and plough, if set up correctly to do the task, will both help in the control of grass weeds. The ability for the Catros to work at that extremely shallow depth yet still move the full soil surface is paramount in creating the best stale seedbed possible. The mouldboard plough, if set up to invert and bury fully will help in the long-term reduction in the viable grass weed seed count in and around the soil surface. The Cayron comes in 5 or 6 furrows with either stepped, or hydraulically-adjustable furrow width options
The Cenius 5003-2TX mulch cultivator will also be on the Stand.

21 years of the Super-S boom, the Amazone sprayer comes of age

Any 21st birthday is worth celebrating and no more so than the coming of age of the renowned Super-S boom. Available in working widths from 15 m up to 28 m, the Super-S boom has been doing its job of guiding the nozzle to its target above crop magnificently for all those years. As a token of our appreciation of the support that the product has received in the market place, Amazone is offering a bonus of £75/m boom width off the nett price of any Super-S boomed sprayer purchased in 2015, amounting, for example, to an extra £1,800 off a 24 metre machine.

The Super-S boomed UF 1801 and front tank on Stand R33 will sit amongst the UX3200 EcoSpecial trailed sprayer and the Pantera 4502 self-propelled.

Inside in the warm, the Amazone Groundcare Stand, to be found in Hall 5, Stand 501, will feature all the 2105 upgrades to the Groundkeeper and Profihopper SmartCut ranges: 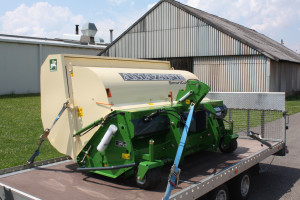 • Attachment points on all models for strapping the machine to a trailer for easier transport between jobs
• The ease of maintenance and adjustment has been simplified with accessibility to the drive clutch lubrication and electro-hydraulic block improved,
• Hydraulic hoses increased in length to cater for all shapes and sizes of towing vehicle
• Improved accessibility to the cutting rotor for blade changing
• Easier cutting height adjustment on both the GH and GHS models
• New mulch flap on the GHS Drive

• The fuel tank capacity has been increased to 40 litres so that a full day's heavy work is possible without refuelling
• The expansion tank for the radiator has been moved so as to be visible from the driver's seat for easy on-going maintenance.
• A Grammer 'Deluxe' seat option with air suspension and heated seat pad
• New rollover protection bar to comply with new safety standards EN ISO 5395

The range of E+S and EK-S salt spreaders will also be present but hopefully they will not be needed for getting in and out of the East of England Showground!

As always the coffee will be on at Stand R33, so pop in and see us there and catch up with what's new and exciting. For anymore details please contact me on the details below.